Guy finds out that $450 ring he bought online is fake, seller goes MIA 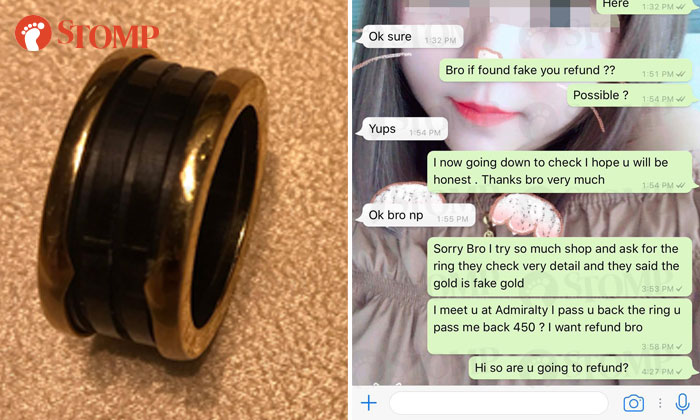 Stomper Marcus was disappointed when he found out the Bvlgari ring he had bought from a seller on online marketplace Carousell was a fake.

However, things got worse when the seller became uncontactable after Marcus told him he wanted a refund.

Marcus had expressed his interest in the ring on Saturday (Mar 10) and proceeded to negotiate with the seller on the price that had originally been listed as $750.

They eventually settled on a mutually agreed price of $500 and made arrangements to meet at Admiralty MRT Station on Mar 12 to make the transaction.

Marcus told Stomp that they further negotiated to $450 when they met and that he gave the seller the full amount in cash.

He added that he also took a photo of the seller's NRIC.

After getting the ring, Marcus wanted to verify its authenticity and decided to have it checked at a pawn shop in Admiralty.

He said he then visited a few more shops but none of them could prove the ring's authenticity.

Eventually, he took the ring to the Bvlgari store at the Takashimaya Department Store at Ngee Ann City where he was told that it was indeed a fake.

He took a photo of the fake ring next to a real one. 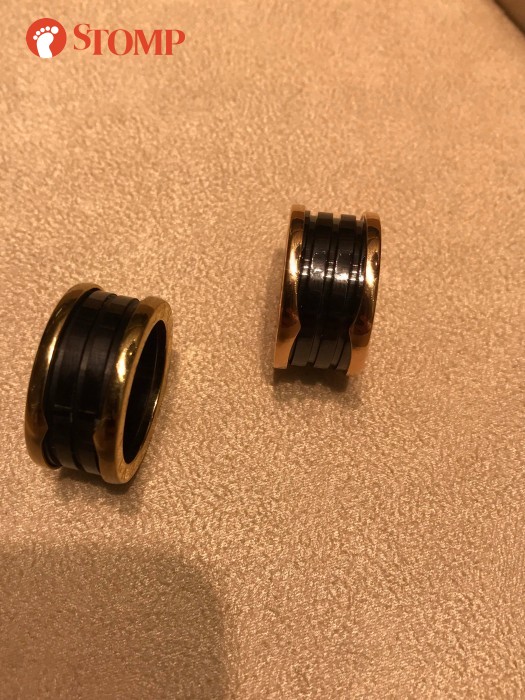 The fake ring (left) and an authentic Bvlgari ring (right).

Prior to his checks, Marcus had asked the seller if he could get a refund if he found the ring to be fake, and the seller agreed via text.

However, when Marcus confirmed that the ring was not real and asked to meet again to get his $450 back, there was no reply.

"My messages only had one grey tick next to them indicating that he probably blocked me," said Marcus.

Marcus has since made a police report.