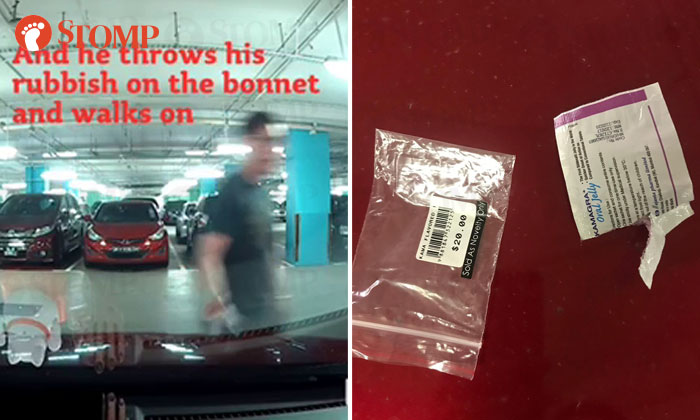 A guy was caught on video leaving rubbish on another man's vehicle at City Square Mall's carpark on May 31.

Stomper Rick alerted Stomp to the incident and shared the video taken from his car's dashboard camera.

Rick told Stomp that he had gone to City Square Mall to take his kids to indoor playground Airzone.

When he arrived back at his car after 4pm, he was upset to find someone had discarded a medicine packet on his bonnet.

"I was wondering why would someone throw rubbish on my car," he said.

"I immediately reviewed my dashboard camera footage to see who had done this.

"I wanted to confront the guy but he had left already."

Rick was later amused when his friend shared the packet had contained Kamagra Oral Jelly, a medicine used for treating erectile dysfunction.

"I didn't know what the medicine was for at first but honestly, I'm more upset that he casually threw rubbish on my car.