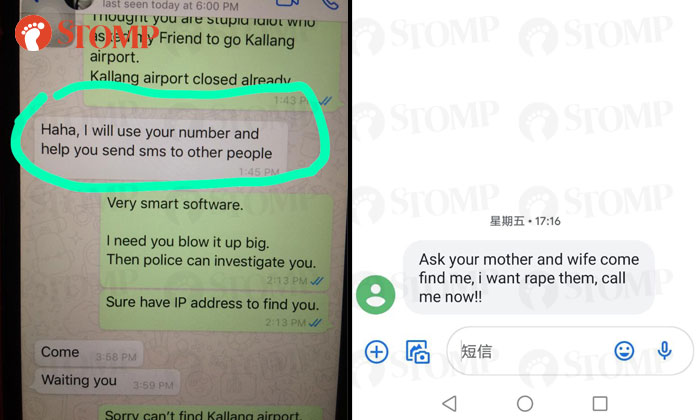 The police are looking into an incident where a man allegedly sent threatening messages to over 100 people using another person's number.

A Stomper informed Stomp that he recently received a message from an unknown number asking him whether he wanted to take up a loan.

"I don't know him at all," said the Stomper.

"He didn't sound local and didn't speak English so I knew he was impersonating a local bank's staff.

"I scolded him not to scam people and he became angry, threatening me and asking me to meet him at 'Kallang Airport'.

"I laughed at him, mocking him that Kallang Airport is closed."

The Stomper said that was what spurred the 'scammer' to reply that he would use his number to send SMSs to others.

"He sent those messages to other people to play with me," he said.

He shared a screenshot of what the other man had sent to other contacts on Mar 11 and Mar 12.

The text says: "Ask your mother and wife come find me, I want rape them, call me now!!"

"I did not send this out to them, I don't know them at all," said the Stomper.

"In total, he sent that message and other similar messages out to over 100 people," he said 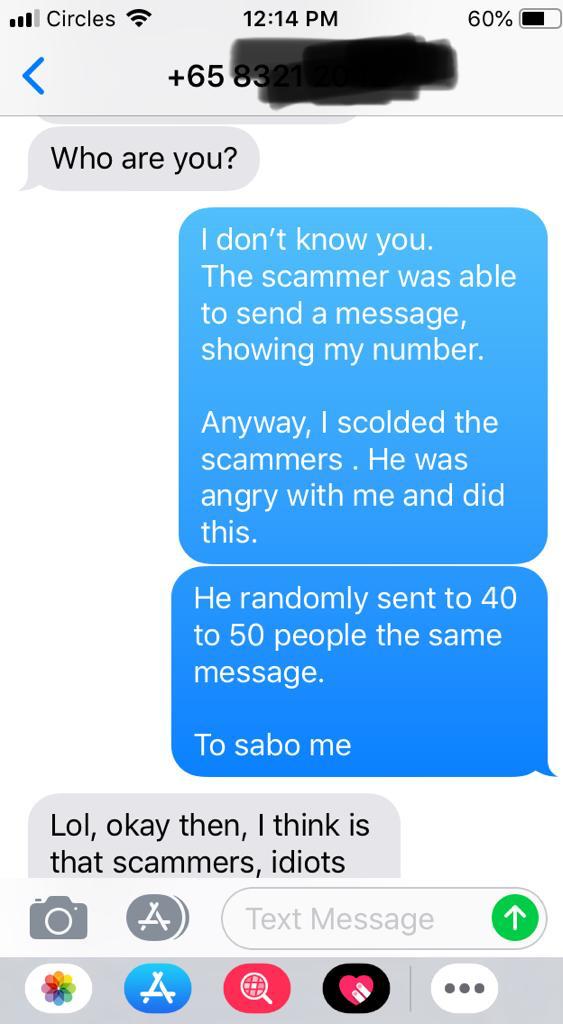 "Because I had over 80 messages from people scolding me and also a lot of people calling me.

"Anyway, it is crazy that the scammer can send messages impersonating other people's numbers.

"I think the general public should be aware that even our phone numbers to send messages can be impersonated.

"This is really scary."

The Stomper said he has since made a police report.

The police confirmed with Stomp that a report was lodged and are looking into the matter.

Related Stories
Carousell user tricked by scammer into giving up game account that he was selling for $100
Carousell apologises for 'incorrect' response to report about verbally abusive user
Buyer can tell $348 bag is 'fake at first glance', but seller insists it looks different in every country
More About:
harassment
text