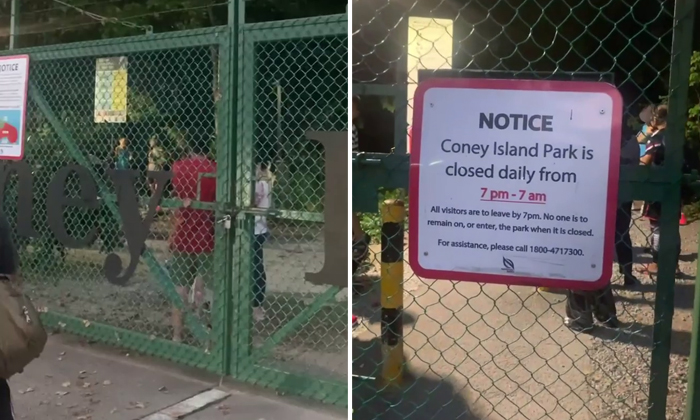 Coney Island has fixed visiting hours, but not everyone got the memo.

A video posted online by Facebook user John Han shows a group of visitors stuck behind the park's gates at night after visiting hours.

In the video uploaded on Saturday night (Jan 22), numerous people - including children - can be seen lingering behind the closed gates of Coney Island's entrance.

The video also cuts to a shot of a signboard on the gate, stating that Coney Island is closed from 7pm to 7am daily.

"All visitors are to leave by 7pm. No one is to remain on, or enter, the park when it is closed," said the sign.

Mr Chia Seng Jiang, group director of Parks East at the National Parks Board (NParks), said the agency is aware that some visitors were unable to exit Coney Island Park after the gate closure.

Park security subsequently arrived within the hour to open the gates for them to exit.

Mr Chia explained that the park is not artificially lighted, and is shut to the public from 7pm to 7am to allow nocturnal wildlife - some of which are critically endangered - to have a natural environment to thrive in.

As there are no lights on the island, it is also unsafe for visitors to explore after 7pm as they might get lost or put themselves at risk.

Information on Coney Island Park's opening hours can be found on signages at the shelters and its entry gates.