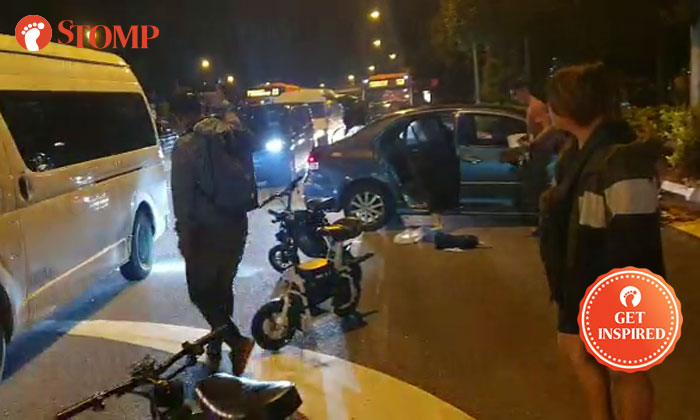 Stomper Saber, one of the riders, alerted Stomp to the accident and shared a video he took at the scene.

In the video, smoke is seen rising from the car and the airbag has been deployed.

Saber and three other members of his riding group placed their e-scooters near the car to direct traffic around it.

"We were crossing at the traffic light when we heard a loud bang," the Stomper said.

"We turned back and saw a Toyota had crashed into a kerb.

"My scooter team, The Brotherhood Scooter (TBS), went forward to help the victim involved in the crash and to help guide traffic flow."

He said that the driver looked a bit groggy and was bleeding a little from his forehead.

In response to a Stomp query, the police said they were alerted to the accident at about 10.34pm.

The car driver refused to be taken to hospital.

Saber acknowledged that PMD riders have been getting a bad reputation lately with errant users riding on roads.

"TBS was organised a few years ago as a non-profit organisation doing mass rides for charitable causes," he said.

"We hope our good deed will influence people to not look at us as a "nuisance" in the e-scooter community, but as normal human beings like themselves.

"We just want people to know that not all of us are like those reckless riders."