Group of 4 smoke and drink at Toa Payoh pavilion: 3 men fined, another repeat offender under investigation 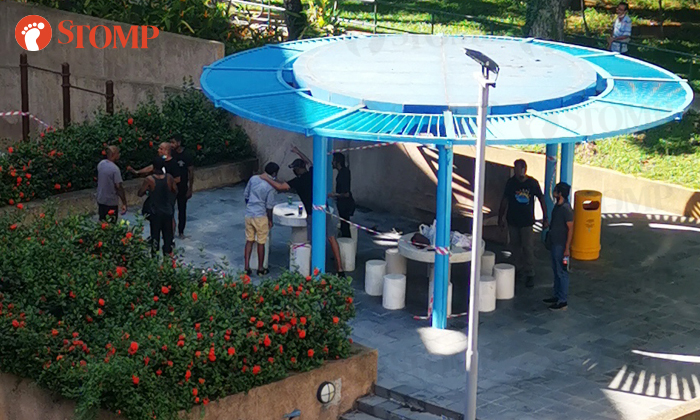 A group of four men were caught flouting safe distancing measures after they created a ruckus while smoking and drinking together at a pavilion in Toa Payoh on Saturday (May 9).

Stomper Sandy shared photos of the incident that occurred at a park near Block 69 Toa Payoh Lorong 4 at around 4.25pm.

She told Stomp: "A group of people were shouting and quarrelling at the pavilion. They did not have masks on and there was no social distancing.

In response to a Stomp query, the police said they received several calls for assistance from members of the public about the group of men at 4.20pm.

When police officers arrived, they found four men sitting together, drinking and smoking, at a park next to the block.

"Three of the four men, aged between 34 and 61, were each issued a notice of composition for breaching safe distancing measures under the COVID-19 (Temporary Measures) (Control Order) Regulations 2020," added the police.

"The fourth person, a 39-year-old man, is being investigated for repeatedly breaching the safe distancing measures.

"The man had already been issued with notices of composition for breaching safe distancing measures on previous occasions."

All four men were advised by the police to adhere to circuit breaker measures and they left the area thereafter.