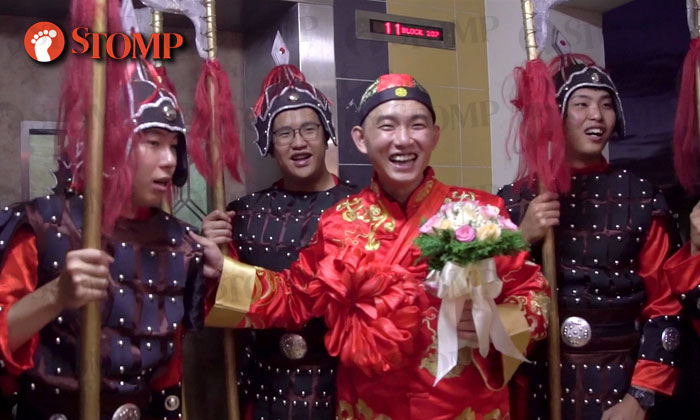 Rather than going for conventional outfits for a gatecrash ceremony on Jun 4, a group of groomsmen decided to 'spoil market' by dressing up as soldiers from ancient China.

A video of the unusual ceremony was sent by the married couple, Alex and Lynn.

In the video produced by Big Boss Production, the groomsmen, or 'brothers' as they are commonly known, can be seen going about their tasks in full-body red and black costumes.

To complete the look, they also held replica weapons.

The groom was clad in a traditional Chinese wedding outfit, standing out from the buddies accompanying him.

The bride's 'sisters' too were dressed for the occasion. Although they looked demure in their outfits, they showed no mercy during the gatecrash ceremony.

Have a look at what went on in the gallery above and video below.

Related Stories
27-year-old Taiwanese woman does solo wedding photoshoot after being diagnosed with stage 4 breast cancer
Chinese fiancée discovers more than 200 of groom's wedding guests were paid $16 each to be there
Russian beauty marries Chinese coal miner -- even though he has no house, car or savings
More About:
creative
unusual
Wedding
groom
bride