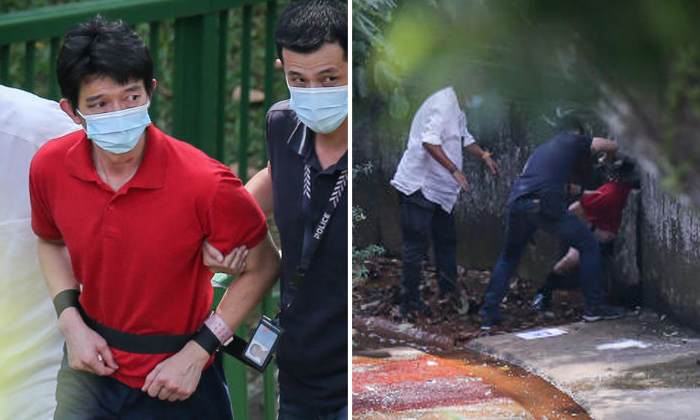 Xavier Yap Jung Houn, 48, the father of two 11-year-old boys who were found dead in a canal near a playground, was taken by the police on Thursday (Jan 27) to where their bodies were discovered.

The playground is in Greenridge Crescent in Upper Bukit Timah.

Yap was charged on Monday with the murder of one of his sons, Ethan Yap E Chern. The other son was identified as Aston Yap Kai Shern.

At about 3.10pm on Thursday, Yap was seen arriving at the scene in a black van. He wore a red shirt, dark knee-length shorts and slippers, and walked with his head lowered.

He was handcuffed and surrounded by about five police officers.

He was then taken to the canal. The area around it had been cordoned off earlier by the police.

Before Yap entered the canal, which was wet and grimy, he changed into knee-high black boots.

Two officers were seen placing at least four arrow markers in the area.

One marker was placed at a nearby playground near an exercise machine, one was placed in the canal, while another was placed on the stairs leading down to the canal.

Many offerings consisting of snacks, flowers and notes had been placed on a path by the canal.

As Yap walked past the offerings, he looked at them for a moment.

He and the officers then climbed into the canal and walked along its length until they were out of sight.

Yap was in the area with the police officers for about 35 minutes, and then left the location afterwards in the black van he had arrived in.

Other investigating officers remained at the scene after Yap left.

At about 5pm, the team of officers left and the police cordon tapes were taken down.

The two boys were found in the canal, which is near a playground in Greenridge Crescent, between 4.23pm and 6.25pm last Friday.

Yap had called the police for help on Friday. He was arrested the next day.

The boys are believed to have had special needs and attended a school in the Eng Kong estate area.

During the court proceedings on Monday, the police prosecutor asked for Yap to be remanded for one week with permission to be taken out for investigations, including scene visits.

The case has been adjourned to Jan 31 for further mention.

Police said the boys were found on Friday evening lying motionless in the canal and were pronounced dead at the scene by a paramedic.

If convicted of murder, Yap faces the death penalty.