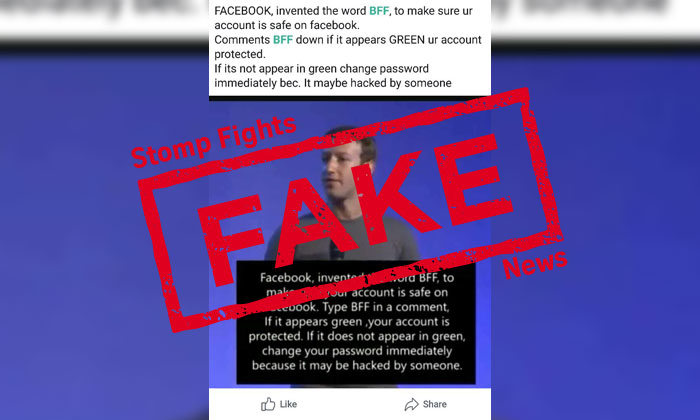 Rumours of typing "BFF" (Best Friends Forever) on your Facebook to test if your account is secure from hackers or not is actually a hoax.

If it does not turn green, users are advised to change their passwords immediately as their accounts may be hacked by someone.

Many people fell for this after several were seen typing the letters that turned green on a Facebook post as seen in this screenshot via World of Buzz. The letters "BFF" turning green is part of a feature on the social media platform where certain words trigger animations, reports Snopes.

Others among them are "congratulations," and "xoxo". Facebook is currently under fire over the use of its data by British political research company Cambridge Analytica which reportedly obtained the personal information of 50 million Facebook users.

If you want to see all the apps that are tracking you on Facebook and know how to block them, check out this Business Insider article.

If you have had enough of the social media giant's treatment of personal data, here is how you can move on and delete your account forever.

Related Stories
Not all masked men are baddies: Foodpanda delivery guy labelled imposter was simply at wrong address
Viral text saying anyone on phone while engine is running will lose licence on the spot is fake
Received a link to survey claiming to offer $400 NTUC FairPrice gift card? It's fake
More About:
Stomp fights fake news
fake
hoax
facebook