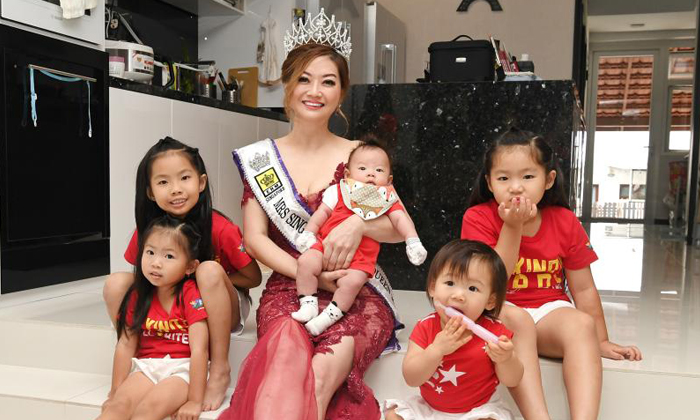 At 44, Ms Laura Lee is already a grandma of five.

And she was named first runner-up at this year's Mrs Singapore & Classic Mrs Singapore Pageant. Ms Lee will be representing Singapore in the Mrs Tourism Queen International Pageant in Thailand in November.

She has a 24-year-old daughter and two sons aged 23 and 21, and five grandchildren - four girls aged seven, five, three and one, and a two-month-old boy.

The beauty queen told The New Paper: "People are usually in disbelief when I reveal the number of grandchildren I have, asking if those are my god-grandchildren instead.

"Also, whenever I go partying or shopping with my kids, people always think I am their sibling."

Ms Lee got divorced 13 years ago. Despite being financially unstable back then, she raised her children on her own.

Now, she is happy with her business partner and boyfriend of 12 years and is able to shower the little ones with activities such as ballet and swimming lessons.

"I couldn't show a lot of care and concern for my children in the past as I was busy working to make ends meet. But I'm glad that I now have the means to make it up with my grandchildren," she said.

On how she maintains her looks and figure, Ms Lee said she avoids eating carbs for dinner and takes beauty supplements daily. She also stays active by playing netball and doing yoga and salsa weekly.

As the managing director of Trade-Pro Trading and the director of five other frozen food companies, Ms Lee is slated to receive an SME100 Awards Singapore award in October.

She said: "There were a lot of hardships when we started the business in 2009 but we've overcome them and things started to look good from there. It was tough but I've learnt that nothing is impossible."