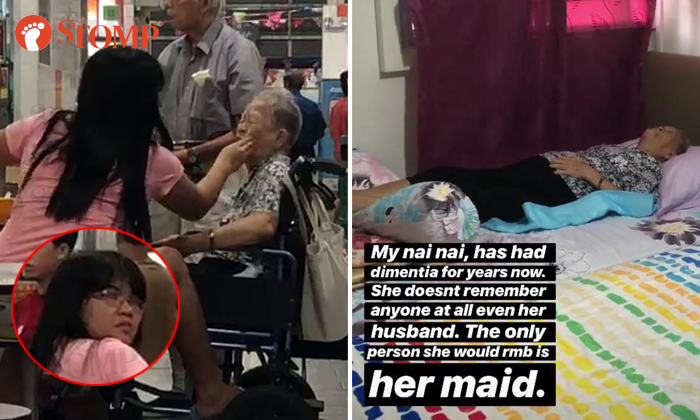 The granddaughter of an elderly woman who was being mistreated by her domestic helper has opened up to Stomp about the incident.

Stomper Elizabeth had witnessed the incident on Saturday (June 29) at Geylang Bahru Market and Food Centre, and was so concerned that she called the police on the same evening.

She lodged a police report on Tuesday (July 2).

A video that Elizabeth captured shows the maid pinching and prodding the wheelchair-bound woman. The maid also pushed a water bottle and shoved her fingers into the elderly woman's mouth.

On Tuesday, Stomp identified and got in touch with the elderly woman's granddaughter.

According to the granddaughter, her grandmother has had dementia "for years" and is unable to perform daily activities such as eating and showering on her own.

"She doesn't remember anyone at all, not even my grandfather (the elderly man in the video). The only person she would remember is her maid," said the granddaughter.

Her grandparents live alone with the maid, she told Stomp.

The granddaughter also posted a series of Instagram Stories showing her reaction to Stomp's July 1 report about the mistreatment. 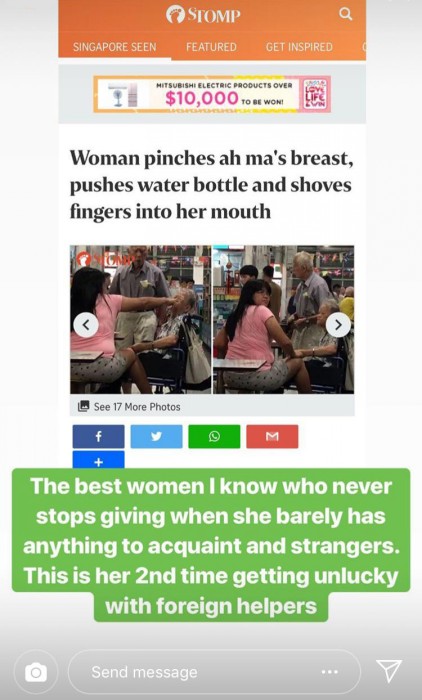 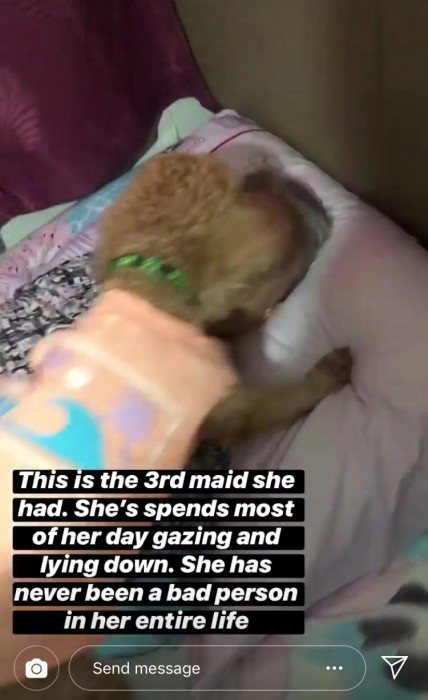 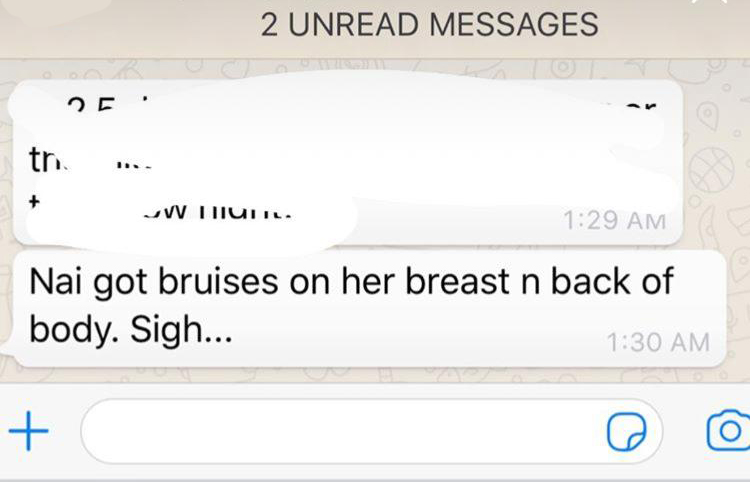 One post showed a screenshot of a WhatsApp conversation about how the elderly woman was found with bruises on her body.

"[My grandmother] has never been a bad person in her entire life," added the granddaughter, who also posted tearful videos of herself speaking about her family's experience with domestic helpers.

The granddaughter shared on Instagram Stories: "It's damn depressing, because I think we have been taking things for granted ever since our first family maid, who had been us since before I was born. She only left us last year due to old age. She was so easy to trust.

"So we always give a lot to our maids. We always make sure they have proper rooms and proper toilets. If it's going to be a storeroom kind of room, we install air-conditioning for them."

However, the family has not had much luck with the domestic helpers who were specifically hired to care for her ailing grandmother in the past 3.5 years.

One allegedly stole $7,000 over multiple occasions from the grandfather, while another had to return home to her husband.

Then came the long-haired, bespectacled maid in the video.

The granddaughter told Stomp: "This maid is new and our third one ever since my grandmother's dementia worsened such that she is unable to perform daily routines.

"We sent her back immediately after seeing the video. She's gone now and we are looking for a replacement."

Responding to critics who asked why her family is not taking care of her grandmother on their own, the granddaughter said: "Everyone is busy with their own businesses.

"We pop in every week, it's not that we leave her there.

"We have dinner but it's not that my grandmother remembers. It's also hard for her to eat outside as she gets hungry by 6pm. If we book a restaurant, it's very hard to get her out of bed."

Her grandmother had also previously expressed wishes to remain the same neighbourhood.

In addition, the elderly woman's house is built accordingly to her needs.

The granddaughter told Stomp: "My family members are currently taking turns to aid my grandmother in her house, where the bathroom has handlebars and is built for her wheelchair.

"What she needs is someone who can carry her to do her daily stuff, which all of us can't."

Calling the maid's actions 'sick', the granddaughter added: "It sucks because I want to be [giving] like my grandmother, but seeing how she was treated like shit by a stranger, it tells me that people don't actually treat you nice just because you are a nice person."