GrabHitch passenger doesn't want to share ride, scolds driver for 'attitude' and wants to report him 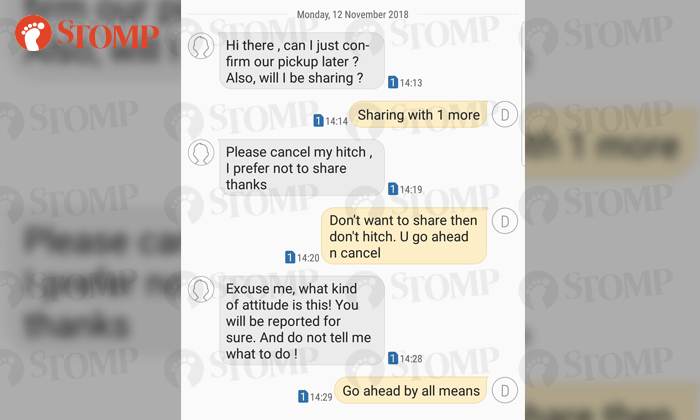 As its name suggests, GrabHitch is a cost-effective carpooling service for drivers and passengers who are going in the same direction.

But it can be frustrating when someone expects full-fledged services despite paying lower fares.

Stomper Dex accepted a GrabHitch booking from a passenger who wanted to go from Changi Airport to the Kim Seng Road area on Monday afternoon (Nov 12).

However, when told that there would be one more person sharing the ride, the passenger asked Dex to cancel the booking and said: "I prefer not to share."

Dex told the passenger not to use GrabHitch if he did not want to share rides, and to go ahead and cancel, only for the latter to reply:

Excuse me, what kind of attitude is this! You will be reported for sure. And do not tell me what to do !"

The Stomper said: "I reported him to Grab even before he said he was going to report me."

Dex, who has been a GrabHitch driver for a couple of months, also told Stomp that he is no stranger to such encounters.

He added: "I feel that Grab should do more to educate GrabHitch riders stuff like having the basic courtesy to take the front seat if you are the first passenger onboard, giving yourself extra time allowance and not to question drivers about how many more passengers or tell drivers that you are expecting to reach at a certain time.

"We drivers are not obligated to fetch these riders. We are doing them a favour as they are going towards the same direction.

"If you're in a hurry or you don't want to share, take a normal GrabCar or get a cab."

Related Stories
Woman cancels GrabHitch ride, saying Hyundai Getz is 'too small, uncomfortable and cheap' -- then lectures driver
GrabHitch driver scolds passenger for booking ride but preferring not to carpool
Passenger hurls vulgarities at GrabHitch driver who couldn't pick him up earlier
GrabHitch driver gets told off by 2 passengers in same morning, ends up earning nothing
More About:
GrabHitch. Grab
rude
text