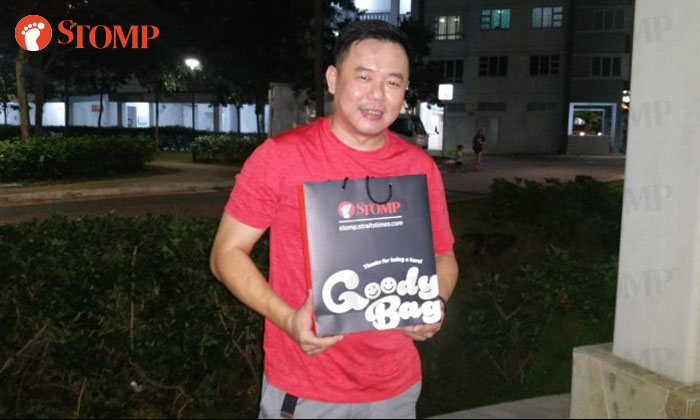 GrabHitch driver Desmond Loo, 42, picked up a passenger, Ms Sindhu, and her dog that was having a fever on Sep 18 at 7.10pm.

Ms Sindhu's dog does not like travelling in a cage and had to be held during the ride from Fernvale to the vet in Ang Mo Kio, but no GrabHitch driver except Desmond accepted her request.

Ms Sindhu was grateful and recounted the incident in a post on Facebook that received 3,100 likes and 1,700 shares.

Stomp spotted the post online and reached out to Ms Sindhu to ask her why she was so appreciative of Desmond.

She explained: "It's very hard for me to get a cab where I live especially on weekends. It is far worse with a dog."

Usually, Ms Sindhu’s husband is the one who drives the dog, Jessie, to the vet but he was outstationed at that time.

Throughout the ride, Desmond was concerned about the dog and kept telling Ms Sindhu to take her time while taking the dog out of the car, to make sure it was not feeling any discomfort.

When she wanted to go home, she faced the same problem of not having any GrabHitch drivers accept her request.

At first, another driver accepted her request after 30 minutes, but after finding out she had a small dog, he rejected her.

Thankfully, Desmond accepted her request again and direct messaged her that he would pick her up from the same place.

In Ms Sindhu's post she says: "I couldn't believe he came back to pick us back! And the first thing he asked me was, Is she ok? What did the vet say?"

Stomp met up with Desmond at the void deck of his HDB block in Sengkang yesterday (Sep 25), where he told us: "I was on the way home when I saw her request for a driver. Since it was along the way again, I just dropped her a message and said I was coming to pick her up."

“Actually it’s nothing. I was on the way out and dropping her off would be on the way to my location. When I was coming back, it was also the same. It is only natural that I would pick her up," Desmond added.

In the Facebook post, Ms Sindhu included that because the ride cost only "seven bucks many drivers wouldn't want the hassle of cleaning up the fur left behind.”

When Stomp asked him about this, Desmond said: "Overall it was a pleasant experience, because she was also a nice lady and we made conversation about the dog and the day. She did mention that cleaning up the fur would cost more than the ride itself, but I really didn't mind."

Desmond was scrolling through Facebook and was shocked to see himself in the viral post that was shared on the GrabHitch Singapore Community page.

In the post, Ms Sindhu praised Desmond and said: "Good humans still exist and I'm so blessed to have met one! God bless your good soul Desmond!"

"I thought it was normal for me to be doing such a thing. I tell everyone that it is important to respect people no matter if they are rich or poor, you should always try to give a helping hand," he said in response to the post.

Desmond did not tell anyone that he was receiving the Stomp Goody Bag because he believes that giving a helping hand is something that should come naturally, and that there was nothing to brag about.

Ms Sindhu told Stomp: "This is my first time having met such a gracious man. Especially someone I don't know to go all out to ensure I reach the vet before it closes and picks me back up."

Stomp presented Mr Desmond Loo with a 'Goody Bag' for being an inspiration, as part of our efforts to recognise everyday heroes and highlight heartwarming deeds.