GrabFood rider spits on ground, curses at driver who honked at him for crossing while red man is showing 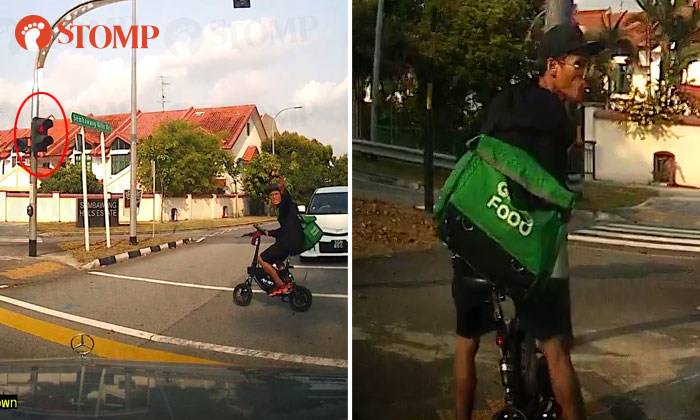 Stomper Raphael was turning right to Sembawang Hills Drive on July 21 when he saw a GrabFood delivery rider zoom across the pedestrian crossing despite the red man showing.

He sounded his horn at the rider who then gestured at him and spit on the ground in retaliation.

In the video, Raphael is heard asking the rider, "What's your problem? It's red light you know, can't you see?"

The rider is heard shouting about Raphael using his horn before saying "c***i" and riding off.

"The rider was unhappy I horned at him when he was in the wrong," said the Stomper.

"He gestured in an aggressive manner, spat at the ground in front of my car and used profanities.

"Spitting in public is also an offence other than running the red light and possibly using his phone while riding his e-scooter."

Raphael told Stomp he has since reported the incident to Grab.

Related Stories
PMD rider blocks traffic by stopping in middle of junction, then gestures at driver to go around him
PMDs on pathways: 'We all need to be mindful of one another and act graciously'
3 PMDs filmed on road in Woodlands: Netizens split over 'ban PMDs' or 'driver, chill lah'
More About:
e-scooter
PMDs
GrabFood
grab
delivery driver