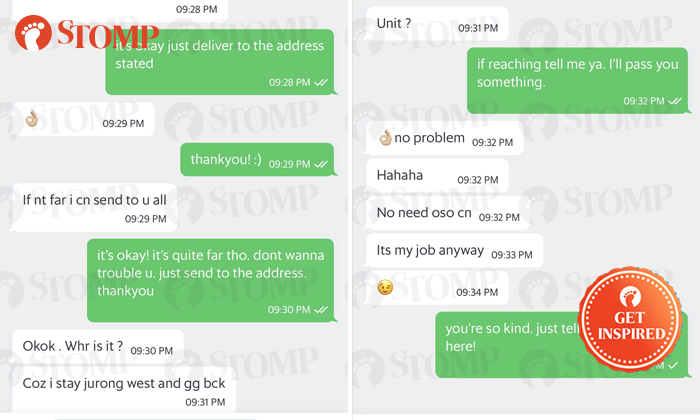 Despite providing the wrong address while making his GrabFood order, a customer received his food anyway thanks to a kind deliveryman who went the extra mile.

Stomper Hani said he made the order on Sunday night (June 14), at around 8pm.

He wanted to cancel his order after realising that he had provided the wrong address.

Hani told Stomp: "At first, I asked the deliveryman if he could cancel my order from his side because I couldn’t get though Grab Support.

"He said he couldn't cancel so I told him that it was fine and to just deliver the food to the address given. He then asked me for the correct address instead."

Screenshots show how the deliveryman, Hong Ming, had offered to send the order to Hani if the distance was not too far.

Hong Ming, who was riding a bicycle, then said that he would pass by Hani's home at Boon Lay Place and asked him: "Want me to send to you?"

The Stomper agreed as long as it was not too much trouble for Hong Ming.

Hong Ming was not only more than happy to bring Hani his food, but even said he did not need an incentive, adding: "It's my job anyway."

Hani told Stomp that he tipped Hong Ming after receiving his order.

The Stomper added: "I was amazed by the fact that he was willing to deliver the food to the correct address and touched when he said that it was his job.

"This helpful GrabFood rider went the extra mile even though he didn't have to. I hope his sincere hard work and kindness can be recognised by Grab as well as inspire other riders."