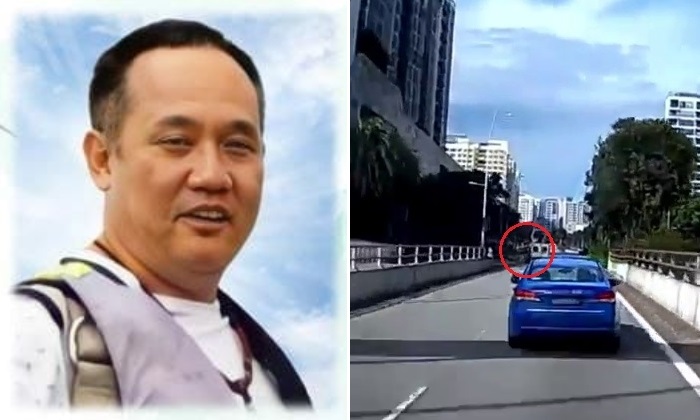 A GrabFood delivery rider collided with a lorry near Waterway Point on Friday (June 24) and died later in hospital.

A video taken with a dashboard camera posted by SG Road Vigilante on Sunday (June 26) shows the moment when rider Tan Kok Tiong crashed into the white lorry.

The rider can be seen emerging from the left and hitting the lorry, which continued moving forward.

The driver of the cam car then stopped in front of the fallen rider and alighted to provide assistance.

In another video, other delivery riders can be seen directing traffic around the rider lying on the ground as paramedics provided assistance.

In response to a Stomp query, police said that on June 24 at about 9.50am, they were alerted to an accident involving a lorry and a power-assisted bicycle along Punggol Walk towards Punggol Way.

"The 54-year-old male rider was conveyed conscious to the hospital, where he later died from his injuries. A 65-year-old male lorry driver is assisting with police investigations," said police.

A donation drive was started by Mr Tan's fellow food delivery riders in the northeast to help his family.