GrabFood deliveryman left with no income to support family after Playmade saga: 'Not the long waiting time that upset me' 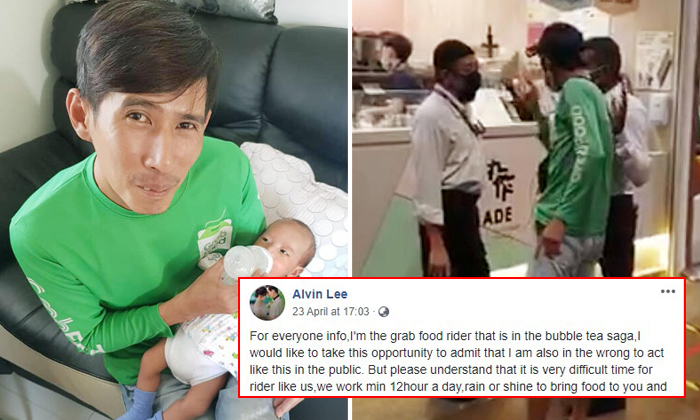 A GrabFood deliveryman who was arrested following a heated dispute with a Playmade employee at Waterway Point last Tuesday (April 21) has opened up about the incident.

Bubble tea chain Playmade previously apologised for the incident and said that its employee had told the deliveryman that it would be a 'f****** long wait' for his order.

The 38-year-old Grab deliveryman, who was arrested for public nuisance, has since shared his side of the story.

In a Facebook post on Thursday (Apr 23), Alvin Lee identified himself as "the GrabFood rider that is in the bubble tea saga" and admitted that he was "also in the wrong" for the way he had acted in public.

He wrote: "But please understand that it is very difficult time for rider like us, we work minimum 12 hours a day, rain or shine to bring food to you and also bring bread home.

"Sometimes anger took over us as we overwork and tire the hell out of ourself."

Alvin said that he was neither asking for sympathy nor pinpointing who to blame as both parties had been "under a lot of pressure and stress" to fulfill the surge in bubble tea orders that day, following the announcement of tightened circuit breaker measures.

He added: "Sincerely I hope that all of the affected staff and myself can just carry on with our life and earn a living for our family, times are tough now for everyone that still got to work and risk getting infected. From this mistake I hope we all learn from it and not let it happen again."

Alvin also opened up about his plight in an interview with Shin Min Daily News.

Alvin, who is the sole breadwinner for his family of four, said that he currently has no income as his delivery-partner account has been suspended by Grab while investigations are ongoing.

His wife was formerly working in sales but lost her job due to the Covid-19 outbreak. He also has to care for his 10-month-old son and his mother-in-law.

Alvin said: "To support my family, I worked more than 10 hours a day and could earn around $2,000 a month, though it barely makes ends meet."

He has applied to work for Deliveroo, but has yet to get a reply. And while he has registered with Foodpanda, he is unable to get any orders.

Alvin hopes that Grab can reinstate his account soon so that he can start working again. He is also willing to try other kinds of work if they are available.

"I have a family to support and no savings, so I really need a job," he added.

Alvin declined to share further details about what happened at Playmade that day, but said he spent more than 10 hours in the police station.

He explained that while he had indeed waited 30 to 40 minutes before the dispute erupted, it was not the long waiting time that left him upset.

"We are facing pressure too. After all, we have to deliver the orders within a certain amount of time so that customers can enjoy their food and drinks. We also have to maintain a high standard so that we do not get complaints against us," said Alvin.