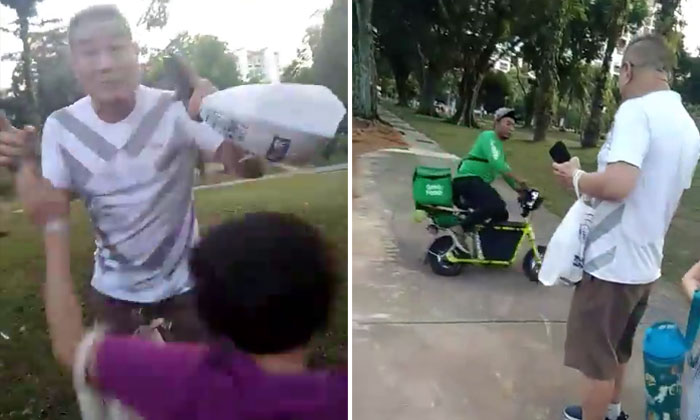 Grab told Stomp it is investigating an incident where an argument erupted between a man and a GrabFood delivery rider at Bishan Park on Saturday evening (July 20).

A video of the confrontation was posted on Facebook by Mohamed Shamirrudan.

In the 12-minute-long video, the older man says that he stopped Shamirrudan for "speeding" on his e-scooter.

In a phone interview with Stomp, Shamirrudan said that he was on his way to pick up an order when the older man tapped him on his shoulder.

"I had already started slowing down when I saw him from afar but he tapped me on the right shoulder and said I was speeding," he said.

"I told him, logically, that if he was able to tap me on the shoulder, then I could not have been speeding.

"I went off but then he cursed my mother and I came back and put down my scooter before asking him what's the issue.

"He started getting aggressive and his wife told me to go away but I didn't.

"He then took out his belt and started swinging it at me but his wife stopped him.

"I started recording the video after that."

In the video, the man accidentally pushes his wife to the ground while angrily gesturing at Shamirrudan.

The rider repeatedly tells the man not to touch him and the man's wife soon walks away before another guy steps in to try to ease the situation.

All three men agree that the police should be called down to the location.

The older man appears to mistake Shamirrudan's e-scooter for an e-bike even though the rider tries to explain that e-scooters are allowed on pavements.

He says "priority" on the pavement should be given to pedestrians.

The passer-by comments on how PMDs are causing a lot of problems although he clarifies and says he is not referring to Shamirrudan.

While waiting for the police to arrive, the rider makes a call to his friend, asking him to come down.

When Shamirrudan's friend arrives, the elderly man starts recording him too.

The elderly man then starts calling the two riders "gangsters".

Shamirrudan told Stomp that the police advised him to register his scooter with the Land Transport Authority but apart from that, there were no other issues.

He said that he has chosen not to pursue the matter further.

"Other riders informed me that they have encountered problems with this uncle before so I just want to spread this video to warn other riders in the area to be careful if they see him."

In response to a Stomp query, a Grab spokesman said that they are aware of the incident and are investigating.

"Customers and members of the public are encouraged to send their feedback to us as we have internal tracking on the quality and safety performance of our delivery partners.

"The safety and well-being of our delivery partners and the larger community are important to us and we encourage all parties to treat one another with respect and kindness."