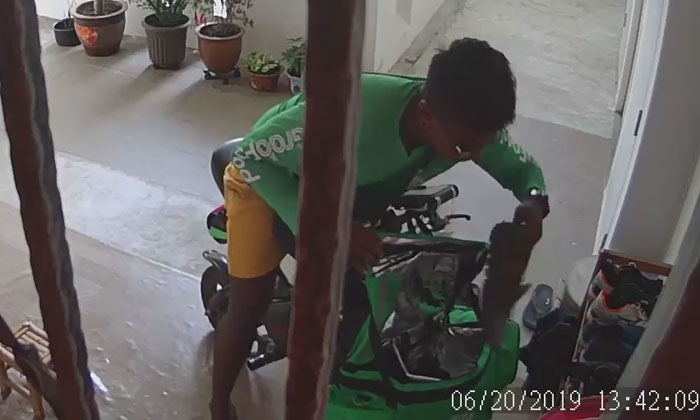 Grab is investigating a case of a GrabFood employee who took a pair of shoes from outside a customer's home after making a delivery.

Facebook user Grace Lim posted a video of the incident on her page on Thursday morning (June 27).

According to a timestamp on the video, the incident happened on June 20 at about 1.41pm.

In the surveillance footage, the GrabFood delivery rider is seen arriving on an e-scooter outside Grace's cousin's home.

He passes a meal to someone who opens the gate before returning to his e-scooter.

After tapping on his phone, he moves forward on his device while looking left and right.

He then quickly grabs a pair of shoes and puts them inside his GrabFood delivery bag before riding away.

In her post, Grace wrote: "Apparently this Grab delivery guy thought [the] CCTV is installed at eye level. Check left right no check up down.

It is unclear where this incident happened.

Responding to a Stomp query, a Grab spokesman said: "We are aware of this and are investigating the matter.

"Grab does not condone such behaviour and will terminate delivery-partners who are found guilty."