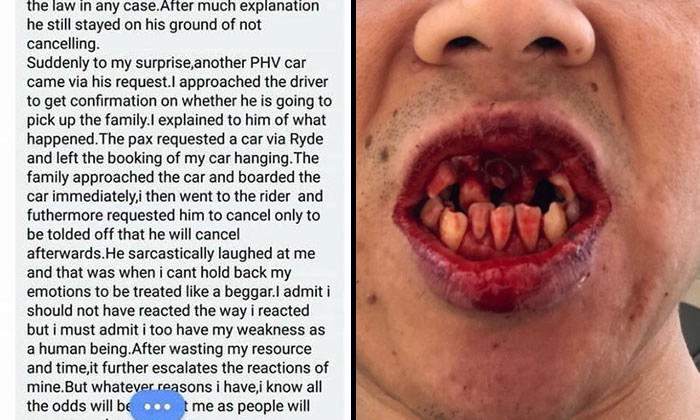 A Facebook user claiming to be a Grab driver who punched a passenger, fracturing four of his teeth, has posted a response, alleging that the victim had ‘laughed sarcastically’ at him and slammed his car door.

In an earlier report, Stomper Henry told Stomp that he was punched in the face by an Audi driver, and suffered four fractured teeth after an argument over the cancellation of a Grab trip at about 11.50am on May 12.

At the time, Henry had booked a JustGrab ride on the app, and was travelling with his family to Choa Chu Kang from Block 727 Yishun Street 71.

He did not indicate in his Grab booking that he was travelling with two children, one of whom was just five years old.

When the Audi driver arrived, he reportedly told Henry that he would not be able to proceed with the trip as he did not have booster seats for Henry’s children.

The Land Transport Authority mandates that all vehicles in Singapore must have booster seats or child restraints for passengers under 1.35m in height, with the exception of taxis as they can be street-hailed.

According to Henry, he then booked another ride with a separate app but did not cancel the Grab trip, as he felt that the driver should have done the cancellation for rejecting the pickup.

The Audi driver returned around five minutes later and an argument ensued which culminated in the assault.

Henry later said that he might have to fork out $30,000 for dental implants and surgery to fix his fractured teeth.

Facebook user HD,  who claims to be the Audi driver said in a post on the Singapore Private Hire Car Drivers & Riders Community's Facebook page that Henry had acted rudely prior to the incident. 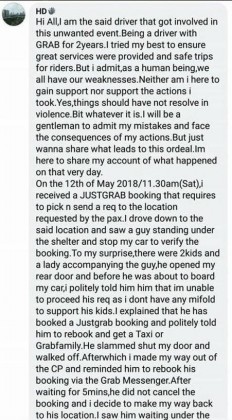 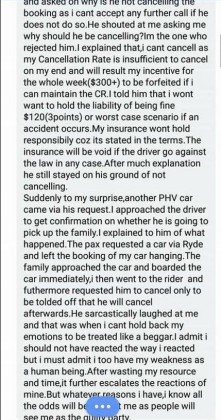 He said that he was surprised to see two children with Henry when he arrived.

"To my surprise, there were two kids and a lady accompanying the guy."

Before Henry boarded the vehicle, HD reportedly told him that he could not proceed with the trip, adding:

“I explained that he had booked a JustGrab ride and politely told him to get a new booking and get a taxi or a GrabFamily ride.

“He slammed shut my door and walked off.”

Based on Grab’s website, booking a JustGrab ride automatically assigns a user the nearest vehicle, either a taxi or car.

The assigned vehicle may not come equipped with children seats.

GrabFamily on the other hand is an on-demand service in which all vehicles come with special seats for children between one and seven years old, and below 1.35m in height.

The drivers for GrabFamily are also specially trained to install car seats securely and strap the children in safely.

HD said that he went back when he realised that Henry did not cancel the booking, and explained to him that he would not be able to accept any new calls if the trip was not cancelled.

He added that Henry shouted at him and asked him why he should be the one cancelling the trip, to which HD replied that he could not cancel as it would affect his Cancellation Rate, which would in turn result forfeit his incentive for the week.

The Grab website states that only drivers who maintain their cancellation rate below a certain percentage can qualify for incentives.

HD continued, saying that he did not want to be held responsible for going through with the trip either as it could result in a fine and demerit points.

Furthermore, in the event of an accident, he would not qualify for compensation by his insurance company.

When Henry’s second ride arrived, HD reportedly approached the other driver and told him about the situation.

He also requested once again for Henry to cancel the Grab trip.

However, HD alleged that Henry then laughed ‘sarcastically’ at him.

HD said he could not hold back his emotions as he felt like he was 'treated like a beggar'.

Concluding his post, HD admitted that he should not have reacted the way he did.

“After wasting my resource and time, it further escalates the reactions of mine.

“For whatever reasons I have, I know all odds will be against me as people will see me as the guilty party.”