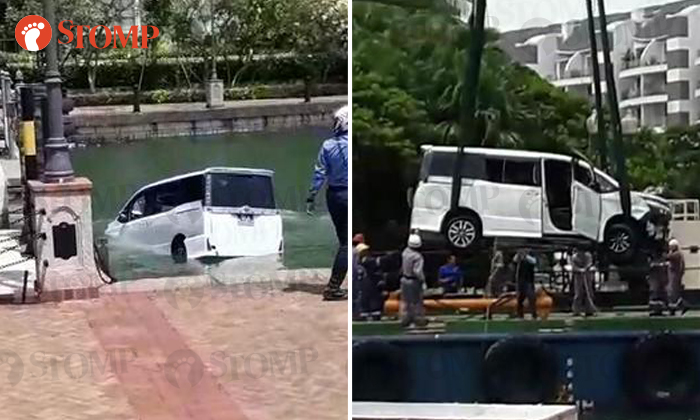 A Grab driver had been under the influence of illegal substances when he drove his multi-purpose vehicle (MPV) into the waters off Sentosa Cove last year, a district court heard on Monday (Nov 5).

Several Stompers had alerted Stomp to the incident that occurred at around 2pm on Aug 25, 2017. They also shared photos and videos showing a car in the sea and subsequently being lifted out of the water.

According to The Straits Times, Lim Jin Ping, 37, admitted that he smoked amphetamine every day in the week before the incident.

The father of three pleaded guilty in court on Monday to two mischief charges, in addition to admitting to one count each of assault and drug consumption.

A report from the Institute of Mental Health, dated Sept 14 last year, said Lim was intoxicated with amphetamines leading to psychotic symptoms, such as auditory hallucinations and paranoid delusions. These symptoms ceased while he was in remand at IMH.

The court heard that he had been admitted to IMH in 2012 and 2015 for drug-induced psychosis after consuming amphetamines.

In the 2017 incident, Lim caused $1,605 worth of damages when he drove to the Sentosa Gateway entrance of the island and smashed through a gantry barrier.

He then drove against the flow of traffic at a roundabout towards Tanjong Beach Walk, before driving through another barrier behind Tanjong Beach Club about six minutes later.

Sentosa ranger Imran Kamarudin, 31, saw the MPV heading towards him at a speed of about 40kmh.

Before he could get out of the way, the MPV hit the right side of his body, causing him to roll off the bonnet onto the ground.

Mr Imran and his colleague Muliadi Mohamad Nafia pursued the vehicle on their bikes as it headed towards Tanjong Gate, which separates Cove Drive from Tanjong Beach Walk.

Lim rammed through the closed gate, causing damages worth $2,190.59 and drove against the flow of traffic along Cove Drive.

When he reached the entrance of W Singapore Sentosa Cove hotel, he made a right turn, drove towards the marina and plunged into the waters nearby.

According to witnesses, Lim had spoken repeatedly of dying and allegedly claimed that "a mermaid told me to do so".

Lim was taken to the Singapore General Hospital and his urine sample later showed traces of amphetamine and methamphetamine.

Related Stories
More photos and videos of car being lifted from the sea after Sentosa accident
Man who drove car into sea at Sentosa allegedly said "a mermaid told me to do so": Witness
Car in sea after accident with Sentosa ranger: 2 sent to hospital, driver arrested
More About:
accident
trapped in odd spot
car ends up in water
sentosa