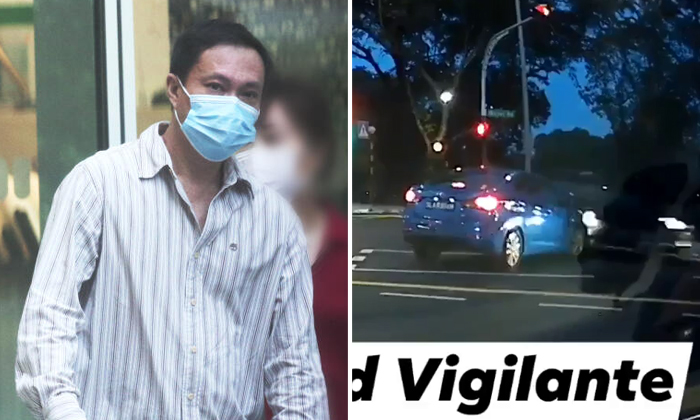 A Grab driver's reckless driving led to him injuring three people in the span of a month after he reversed his car against the flow of traffic in one incident and beat a red light in another.

Michael Chua, 46, was on Wednesday (April 6) sentenced to nine weeks' jail and was banned from driving for three and a half years after he pleaded guilty to two counts of driving in a manner dangerous to the public.

A similar charge was taken into consideration for his sentencing.

On Aug 9, 2020, Chua was driving along Circuit Road to pick up a customer when he made a wrong turn into the entrance of a carpark.

He reversed his car back onto the three-lane road against the flow of traffic and hit two pedestrians.

The victims, sisters aged 60 and 62 respectively, were taken to Tan Tock Seng Hospital.

The older victim experienced persistent left wrist stiffness and thumb pain for three to four weeks after the accident. She was given 57 days' hospitalisation leave.

Her last visit to the hospital on March 18 last year found that she was unable to straighten her left thumb completely and that the injury is likely to be permanent.

The younger victim suffered abrasions on her elbow and ankle. She was given 90 days' hospitalisation leave.

On Aug 31, 2020, Chua beat a red light when he was driving along North Buona Vista Road and hit a car that was making a right turn.

After the collision, he got out of the car and spoke to the other car's driver, a 43-year-old woman, but refused to exchange details with her.

Said Deputy Public Prosecutor Kevin Ho: "The accused also told the victim to claim her own insurance for the accident and to settle it herself."

Chua then took photos of the scene and drove off.

The victim suffered neck pain and was given a three-day medical certificate.

Video footage of the accident at Buona Vista was captured and uploaded on the SG Road Vigilante Facebook group. It had garnered 9,200 views as at March 4 this year.

Seeking nine to 18 weeks' jail and a driving ban of 36 to 40 months, DPP Ho said Chua's act of reversing his car against the flow of traffic was particularly dangerous as there were numerous vehicles nearby and he was driving at a relatively fast speed.

The DPP noted that Chua has a history of speeding in 2018 and failing to wear a seat belt in 2014.

Chua, who was unrepresented, said in mitigation that he had called the first two victims to ask of their well-being and offer assistance.

"I am the only son and I have two elderly parents at home. My father has a permanent disability and my mother had a stroke last month," he added.

The maximum penalty for each count of driving in a dangerous manner is a $10,000 fine and a jail term of two years.