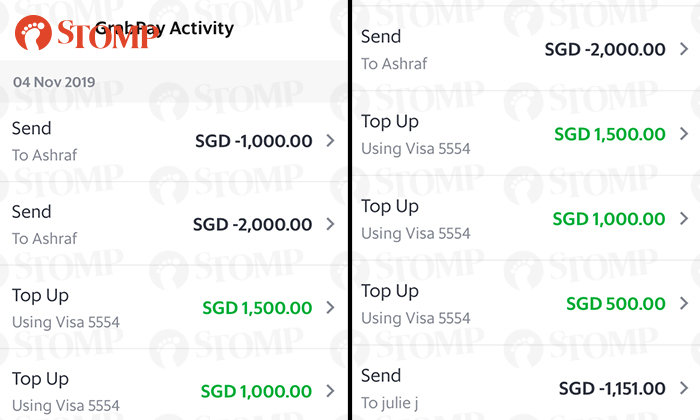 Grab is assisting a Stomper who allegedly had $4151 transferred from his GrabPay and into other people's accounts after losing his phone.

Stomper Loh shared screenshots of the transactions and told Stomp: "I went out for supper with my friends at about 12.30am on Nov 4.

"We were at a coffee shop at the junction of Lorong 15 Geylang and Sims Avenue.

"After about an hour, one of my friends gave us a lift to somewhere in Paya Lebar where I flagged a taxi.

"Another friend of mine took the cab with me and he was the first to alight.

"I reached home slightly after 2am and noticed my Samsung Galaxy Note 5 was missing about half an hour later.

"I was tracing my phone's location and found that it was somewhere in Tampines. When I rang my phone, no one answered but shortly after, the phone was switched off.

"When I was going through my email, I saw a message that said someone was trying to change the email address linked to my Grab account. Grab also sent me an email asking if I was the one who requested the change.

"Grab also shared the new email that someone was trying to link to my account.

"At that point, I called my telco to disable my SIM card and called Grab to suspend my account.

"The hacker had even changed the passwords on several of my Gmail accounts. As of now, I'm still struggling to get one of my accounts back because the phone number associated with the account has been changed.

"I made a police report and also requested for a replacement SIM card from my telco on the same day I lost my phone.

"I didn't know about any money being transferred from my GrabPay account until Nov 7. I wasn't that concerned about anything fishy that could happen since my phone is locked with a thumbprint and passcode.

"When I logged in, I discovered some transactions had been made and immediately called Grab. They told me that someone will be in touch with me.

"There were two of my bank cards associated with my Grab account. I didn't know that people could top-up money into GrabPay without requiring further verification.

"I contacted my banks and they told me to make a police report.

"On Monday (Nov 11), I received a call from Grab saying that they're working with the police to get to the bottom of this case.

"I also got a call from the police who were trying to gather more information from me.

"I know that my phone was stolen and it's not that I had misplaced it.

"If I had misplaced it, I don't know how these people could be able to hack into it since fingerprint and passcode required. Seems to me that these people are experts.

"I remember that the last place I was using my phone was at the coffeeshop.

"I'm just wondering how is their security feature so easy to defeat. Just imagine if someone else has your phone.

"I don't know if I'll be liable for these transactions. Is there any fraud protection? E-payments like these could be dangerous.

In response to a Stomp query, a Grab spokesperson said: "We are aware of this case and have reached out to Mr Loh to provide assistance.

"As police investigations are ongoing, we are unable to comment further."