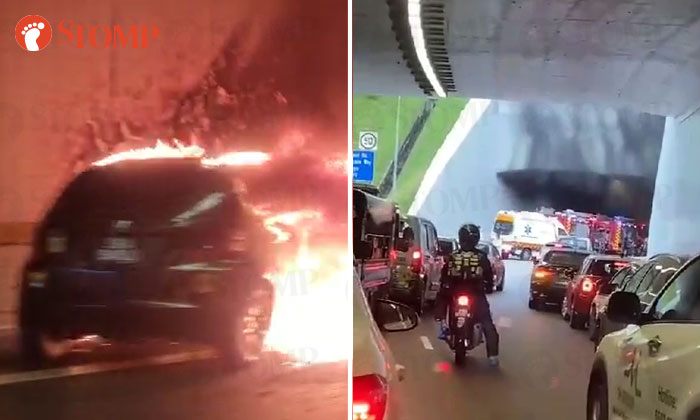 Two members of the public rescued a woman from her car shortly before it burst into flames in a tunnel along the Central Expressway (CTE) towards the Seletar Expressway (SLE) on Tuesday (Nov 2).

Several Stompers alerted Stomp to footage of the burning vehicle and smoke coming from the tunnel.

In one of the clips, traffic had come to a standstill.

The Singapore Civil Defence Force (SCDF) said in a statement on Facebook that they were alerted to the vehicle fire at 5.05pm.

"Upon SCDF's arrival, the vehicle had crashed against the wall of the tunnel and engulfed in flames," SCDF said.

"Firefighters extinguished the fire with one compressed air foam jet."

At about 5.05pm today (2 Nov), SCDF was alerted to a vehicle fire in a tunnel along the CTE towards SLE. Upon SCDF's...

The 33-year-old female driver was taken conscious to Khoo Teck Puat Hospital. No other injuries were reported.

SCDF added they have reached out to the two good Samaritans and commended them for their quick-thinking and selfless act.