Golden Mile Tower fight: Man says he took down 3 others in self-defence to protect his wife 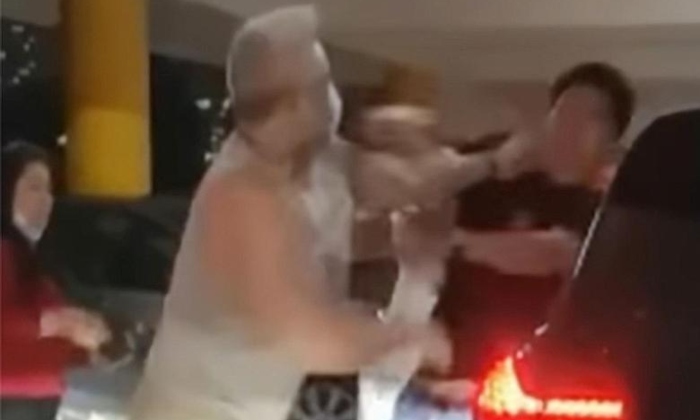 A man who is seen brawling with three other men in a viral video has claimed that he was acting in self-defence to protect his wife.

Though outnumbered, the burly man, who has greyish-white hair, was more than a match for his three antagonists and at one point knocked out one of them with a right hook.

The incident occurred at the carpark of Golden Mile Tower last Wednesday night.

The one-minute clip, which was shot with a phone camera from a stationary vehicle, was posted on SG Road Vigilante's Facebook page and has since garnered more than 4,500 shares and 600 comments.

It starts with the man, who is wearing a grey singlet, beige shorts and a mask, and his wife facing up to three men, one of whom is shouting aggressively: "Lai!" ("Come" in Hokkien.)

The husband shoves the aggressive man who is too close for comfort, sending him stumbling backwards. As he regains his footing and moves forward, he is staggered by a punch.

The husband then tussles with the other two men and pushes them down as the camera cuts away for a few seconds.

As the two men back away, the first man comes back for round two, but the husband either avoids or blocks his blows before landing his knockout punch.

He then pushes another man and strides towards the other while shouting in Hokkien: "You don't come looking for trouble." But his wife intervenes to end the fight.

In an interview with Chinese-language daily Lianhe Zaobao, the husband, who declined to be named, said the video was not an accurate depiction of what happened.

Giving his version of events, he said he was defending himself and his wife against the provocations of the three men.

"My wife and I were about to leave for home when two men approached us in a provocative manner. They appeared to be drunk. Their friend arrived shortly in a Porsche and joined them in provoking us."

He said the men, who looked to be in their 30s, surrounded him and kept shouting at him.

His wife then got out of the car to try to mediate, but one of the men turned on her.

"He pushed my wife, and the other hit me on the shoulder. I wanted to prevent them from hurting my wife and to protect myself, so I fought back in self-defence."

On his knockout punch, the man said his opponent was not as badly hurt as it seemed on the video or as speculated online.

"He got up after less than five minutes. They then quickly drove away," he added.

He said the Porsche created a jam in the carpark by obstructing traffic. When the fight ended, he told them to move the car.

"Some drivers whose cars were stuck in the jam left their name cards with me and said they could testify if needed," the man told Zaobao.

Netizens were split on who was at fault, with some saying the husband was to blame for throwing the first punch while others felt he was within his rights to act in self-defence.

"If there's a serious injury, that old man is in trouble. He's the one who started the assault," said Ivan Yan on SG Road Vigilante's Facebook page.

But Sg Gaz argued: "The uncle is defending himself from the three bullies. They picked a fight with him."

The police said a report has been made and investigations are ongoing.