Gojek passenger gives wrong destination, but refuses to cancel due to $4 fee 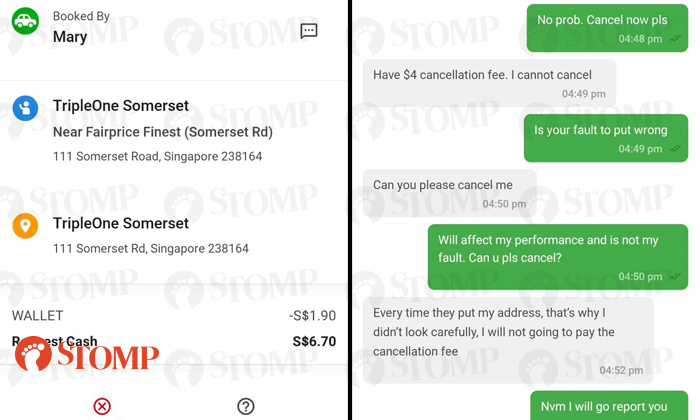 A woman booked a Gojek ride but unknowingly had the same address for both her pick-up point and destination.

However, she refused to cancel the ride as it would incur a $4 cancellation fee.

Stomper S, the Gojek driver, was frustrated as it would affect her performance if she cancelled the ride on her end instead.

Screenshots shared by S show how the passenger made a booking with TripleOne Somerset as both the pick-up and drop-off points on Wednesday (April 7).

The passenger admitted that it was a mistake, but said she "cannot cancel" as she did not want to be charged the $4 cancellation fee.

She asked S to "please cancel me" and insisted that she would not be paying the fee, despite S trying to explain.

S told Stomp: "I had no choice but to cancel.

"I just want to highlight this to anyone who are passengers that they should pay cancellation fees when necessary."

Related Stories
GrabHitch driver says 'I drive car not aeroplane' after being asked to arrive on time
PHV driver scolds passenger for 'paying peanuts and expecting elephants' after she refuses to pay extra $5 for stroller
Lowballer bargains with 64-year-old cabby over $7.60 fare because 'I'm old and not much money'
More About:
Gojek
text
rude