Gojek driver reacts to his own video in interview with Dzar Ismail and Raja Razie: "I lost sleep" 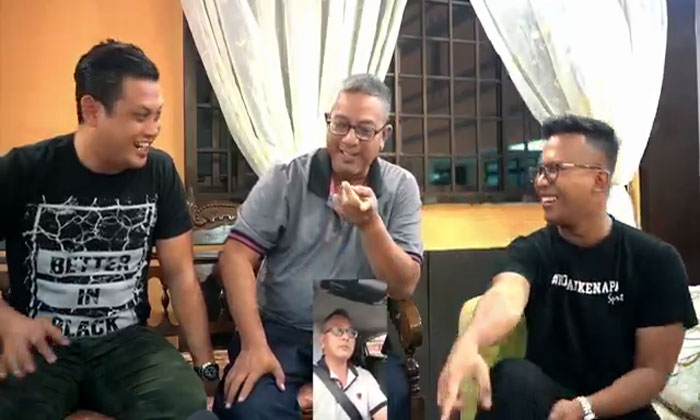 The Gojek driver in the now viral video of a passenger accusing him of kidnapping her is speaking about the incident and giving some insight to moments that have now become memes.

In the interview, they get Kamal, 49, to react to the viral video and give comments on key points.

Prior to watching the video together, Kamal said that he has received over 700 friend requests since he posted the video.

Before the video was taken down, it had garnered more than 20,000 shares.

Following the incident, Gojek said in a statement that a 'fair outcome' has been reached for Kamal and the passenger.

In response to a Stomp media query, the Land Transport Authority (LTA) said they are looking into the incident.

Kamal told the interviewers that he started recording the video after the woman starting using the words "kidnapping" and "hostage".

He said he thought he should have "evidence" as she was making serious accusations and that if he did not have a video recording to prove otherwise, he might get into trouble.

He also explained that the woman knew that he was taking her to a police station.

"I brought her to the station because she agreed," he said.

However, she wanted him to take her to Tanglin police station but he decided it was too far and wanted to go to the nearest one which was at Toa Payoh.

When asked who he thought the woman had called and put on speaker while in the car, he agreed with most netizens that it was the passenger's mother.

Dzar commented that he was impressed at how cool and collected Kamal was during the entire episode and said that if it was him, he would have gotten angry.

When asked if he is normally a calm person, Kamal candidly replied, "Not always".

When they got to the point where Kamal approached a Certis Cisco officer, he admitted he had gone to the wrong place.

Dzar then asked how the officer reacted to the situation as his face was out of frame.

Kamal said that the officer did not know anything but got involved because he was trying to give Kamal directions to the police station while the woman was making a lot of noise.

He told Dzar and Raja that despite working for Uber and Grab prior to driving for Gojek, this was the first time he has ever encountered a situation with a passenger like this.

Kamal said that he had lost sleep because of the incident and that he had also lost weight because he couldn't eat.

However, sharing the video did give him relief.

His advice to riders: Be reasonable.

For drivers, he said: "You have to be more patient.

"Mix with some good friends and try to avoid this nonsense."

He added that he is thankful for his family and friends for supporting him despite his kids making fun of him over the video.

At the end of the video, he thanked all those watching for the moral support they have given to him and his family.

Related Stories
Is it because you’re in an emergency? Otherwise, please use Grab or Gojek, not ambulance
'Fair outcome' reached for Gojek driver and passenger in viral video over alleged kidnapping
Passenger accuses Gojek driver of kidnapping her after she refuses to pay for ERP
More About:
Gojek
viral
passenger
dispute
argument
private hire driver