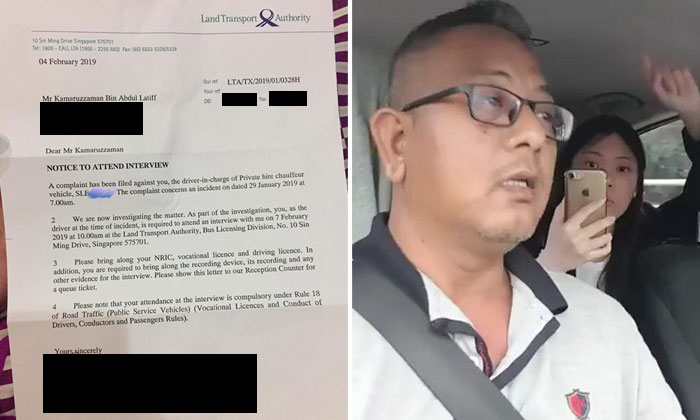 The Gojek driver in a viral video where a passenger accused him of kidnapping her has been summoned by the Land Transport Authority (LTA) for an interview as a part of investigations after a complaint was filed against him.

He wrote: "At last here it come. Just pray for me." 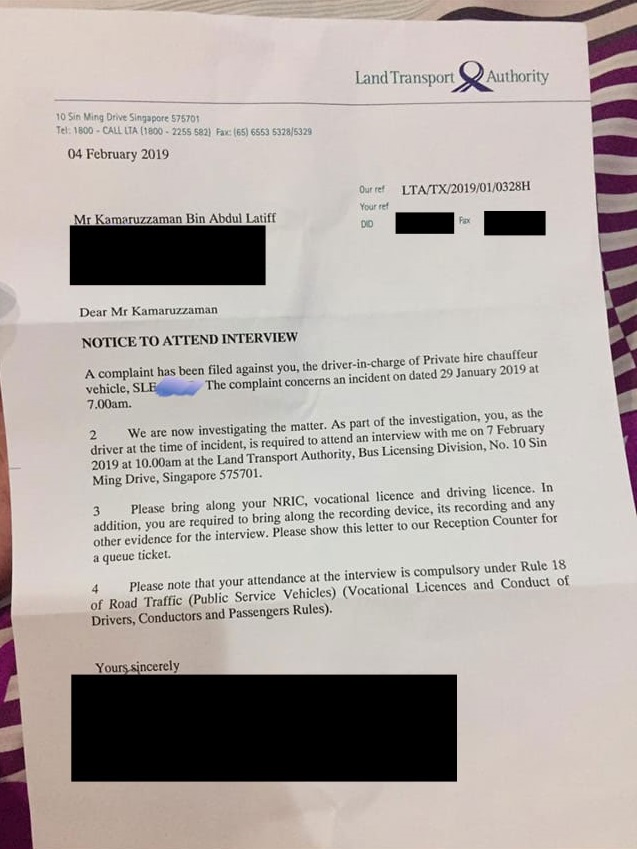 In the letter titled "Notice to Attend Interview", Kamaruzzaman is asked to attend an interview with an LTA official on Thursday morning.

The letter reads: "A complaint has been filed against you... The complaint concerns an incident dated Jan 29 at 7am. We are now investigating the matter."

He is asked to bring his NRIC, vocational licence, driving licence, as well as "the recording device, its recording and any other evidence".

It also states that his attendance is compulsory under traffic rules.

An LTA spokesman told Stomp on Monday (Feb 4): "LTA is looking into this incident."

In response to further media queries, LTA added: "To get a more comprehensive understanding of the matter, LTA will need to meet up with both the driver and the passenger to hear their respective accounts of the incident."

According to The Straits Times, a Gojek spokesman said that the company is aware of LTA investigations, which it is cooperating with "on an ongoing basis".

"It would not be appropriate to comment further at this stage,” the spokesman added.

On Jan 31, the video Kamaruzzaman shared of the dispute he had with a passenger went viral.

In the video, the woman accused him of cheating him because he could not avoid the Electronic Road Pricing (ERP) gantries during the journey.

He had picked her up in Bishan to take her to Coleman Street at about 7.10am on Jan 29.

She then made a phone call and told the person on the other line that she had been taken hostage by Kamaruzzaman.

The driver repeatedly told the woman that he would prefer to settle the matter at a police station.

When they approached a Certis Cisco officer in Toa Payoh, the woman screamed and claimed that Kamaruzzaman had locked the door on purpose because he wanted to kidnap her.

He and the officer tried to explain that the car had auto-lock doors.

In a Skype interview with ST on Sunday night, the passenger, who wanted to be known only as Jovina, said she had not had the chance to make a police report as she left for Taiwan shortly after the incident, adding she is "thinking about it".

In an e-mail on Monday, Ms Jovina told ST that Gojek had not contacted her.

She did not say if she had filed a complaint with LTA.

Related Stories
Gojek driver reacts to his own video in interview with Dzar Ismail and Raja Razie: "I lost sleep"
Is it because you’re in an emergency? Otherwise, please use Grab or Gojek, not ambulance
'Fair outcome' reached for Gojek driver and passenger in viral video over alleged kidnapping
Passenger accuses Gojek driver of kidnapping her after she refuses to pay for ERP
More About:
Gojek
viral
passenger
dispute
argument
private hire driver