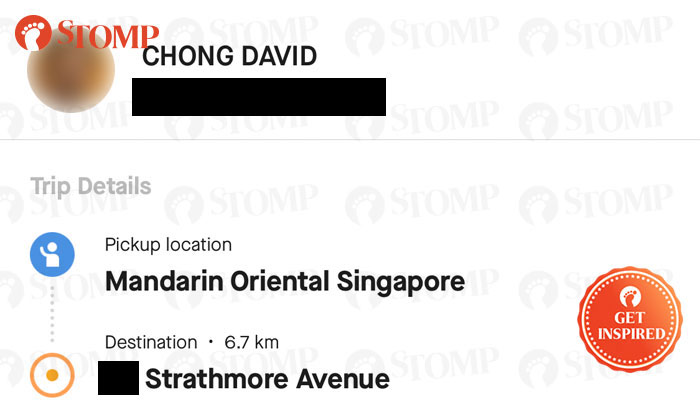 A Gojek driver went above and beyond in terms of customer service by returning a passenger his wallet and refusing to be compensated for it.

Stomper Kelvin had the highest of praise for Gojek driver David Chong.

Kelvin told Stomp that he had booked a ride with Gojek at about 9.30pm on Nov 20 from Mandarin Oriental to his home at Strathmore Avenue.

"It was after dinner and drinks with my business partner," said the Stomper.

"The post-effects of the champagne I had might have clouded me a little and I didn't realise that I left my wallet behind after arriving home.

"My wallet held $100, bank and credit cards, and most importantly, my NRIC."

Kelvin said he did not realise his wallet was missing until the next morning.

He was not even sure if he had left it in the Gojek car.

"The Gojek customer service officer was helpful and told me that Mr Chong had logged a Lost and Found call after I alighted.

"Arrangements were then made for Mr Chong to deliver the wallet to me on the same day."

Kelvin wanted to compensate Mr Chong for the trouble of returning his wallet but was turned out.

"He shared with me that Gojek will be compensating him for his time and effort for returning my wallet.

"Wow! Gojek certainly takes care of their drivers and I hope this little incident will inspire everyone.

"The trouble one has to go through when losing their wallet is a great deal of work.

"From making police reports to informing banks and health insurance companies to re-issue new cards and applying for a new NRIC.

"Thanks to Mr Chong, I was spared the hassle and I am grateful to have met him."

In response to a Stomp query, a Gojek spokesman said they were happy to hear about the positive experience Kelvin had with their driver-partner.

"We have thanked and rewarded David for going the extra mile for our customer, and we hope his act of kindness will inspire all our driver-partners to continue to uphold a high standard of service quality," the spokesman said.

"Gojek is committed to delivering a great experience to our users, and a key part of this is creating a safe, reliable and enjoyable environment for both our customers and driver-partners."