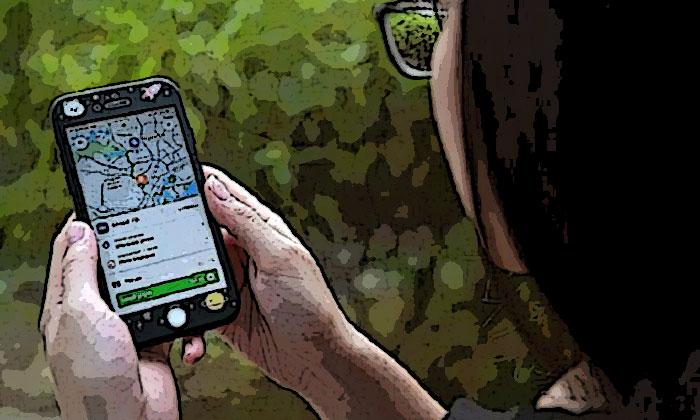 A Gojek driver allegedly asked a woman to exit his vehicle after finding out she works at a clinic in Paragon.

She said that she was rushing to work in the morning and had booked a GoCar via the Gojek app.

After the driver picked her up, he reportedly asked her if she worked at a clinic at Paragon along Orchard Road.

When she said she did, he allegedly asked her to get out of his car and said he was "not comfortable" driving her.

"I was in utter disbelief so I asked him if he really meant it and he said yes...," she wrote.

"He has kids at home and he would not want to drive me.

"I was shocked but still respecting his wish I got off the car feeling bad how doctors are being disrespected when they are actually serving the society.

"As the trip had already started he was unable to cancel it so he asked me to cancel the trip.

"Obviously, I was also not going to be able to do so once the ride had started... this would result in his financial loss as he can neither charge me nor cancel.

"So then he changed his mind and asked me to sit in his car again.

"I was quite hurt and did not want to travel in his car anymore.

"He told me I can COMPLAINT SINGAPORE to  Gojek Singapore if I want."

She added that she has since reported the incident to Gojek and was offered a free voucher. 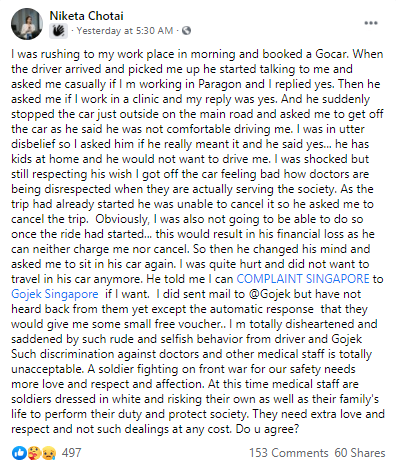 The incident left her disheartened and saddened by the "rude and selfish behaviour" from the Gojek driver.

"Such discrimination against doctors and other medical staff is totally unacceptable," she said.

"A soldier fighting on front war [sic] for our safety needs more love and respect and affection.

"At this time, medical staff are soldiers dressed in white and risking their own as well as their family's life to perform their duty and protect society.

"They need extra love and respect and not such dealings at any cost. Do [you] agree?"

In response to a Stomp query, a Gojek spokesman said: "We are aware of this case and are reaching out to both the customer and the driver-partner involved to understand the matter.

"Gojek does not tolerate impolite behaviour or discrimination of any kind towards customers or driver-partners.

"Our policies are stated clearly in our driver-partner handbook and emphasised during our onboarding process.

"Since the onset of the COVID-19 outbreak last year, we have increased our educational outreach to driver-partners on the precautions they must take to ensure a safe ride environment, especially if they pick up passengers from hospitals, including winding down their vehicles’ windows and disinfecting their vehicles after every completed trip, to improve ventilation and sanitation.

"We also launched GoHeroes, an initiative to support frontline healthcare workers, which saw thousands of Gojek driver-partners pledge their commitment to ensure healthcare workers could continue to travel to and from their workplaces safely and comfortably.

"As frontline heroes themselves, we continue to recognise and reward driver-partners who go above and beyond in their efforts and dedication to keeping the nation on the move."

Related Stories
Gojek responds after driver allegedly kicks 3 passengers off ride for refusing to tip him
Gojek driver takes passenger to wrong destination and allegedly forces him to get out in heavy rain
Gojek investigating case of driver failing to pick up couple after telling them "the weather is too hot"
More About:
Gojek
doctor
bad service
complaint