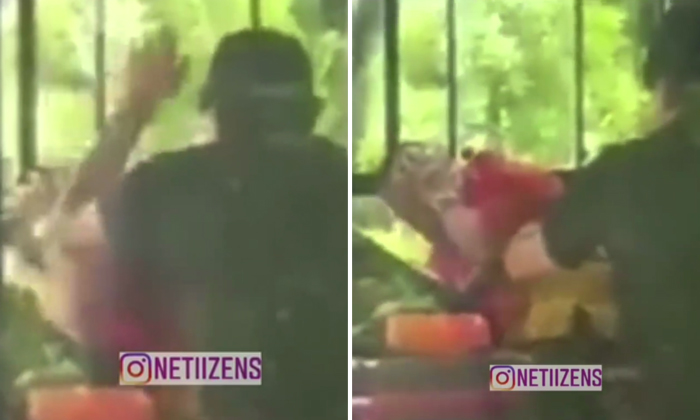 Angry at a bus driver for telling them to wear their masks properly, two men allegedly kicked and punched the man, fracturing his nose.

Aziz Khan Sher Khan, 61, and Ahmad Robinson, 70, were charged in a district court on Wednesday (Nov 3) with ganging up against bus driver Hew Kim Keong to cause grievous hurt him .

The two Singaporean men are accused of committing the offence on board bus service 2 along Loyang Avenue at around 11am on Tuesday.

The court heard that Khan was earlier released from prison last year after serving his sentence for an unspecified offence and was placed on a remission order.

As part of the order, he was supposed to stay out of trouble from May 5 last year to Jan 12 next year.

He is said to have breached the order after he allegedly assaulted Mr Hew on Tuesday. Mr Hew is a bus captain with transport operator Go-Ahead Singapore.

If convicted and sentenced to jail for assaulting Mr Hew, he may have to spend an additional 72 days behind bars, which is the remaining duration of his remission order.

In a statement on Wednesday, the police said that the pair were on board the bus in Loyang Avenue around 11am on Tuesday, when they got angry Mr Hew after he told them to wear their masks properly.

According to court documents, the men allegedly threw several punches and kicked Mr Hew, causing him to suffer a nasal bone fracture.

The two were identified and officers from Bedok Police Division arrested them later that day.

The men are also being investigated for non-compliance with safe distancing measures, said the police.

They were each offered bail of $15,000 on Wednesday and their cases have been adjourned to Dec 1.

Offenders convicted of voluntarily causing grievous hurt can be jailed for up to 10 years and fined or caned.

Ahmad and Khan cannot be caned as they are over 50 years old.

This was one of two incidents on Nov 2 where Go-Ahead bus drivers were verbally abused and physically assaulted while performing their duties, said the company in a statement on Facebook.

Both captains were conscious when taken to hospital by ambulance and none were seriously injured, it said.

“Both incidents occurred as our bus captains were looking out for the safety of their passengers, reminding them on proper mask-wearing and to hold onto the grab pole on the crowded bus,” said Go-Ahead, condemning the acts.

The firm did not provide further details of the other incident.

It added: “It is preposterous that these acts of diligence resulted in them being assaulted.”

National Transport Workers’ Union executive secretary Melvin Yong said in a Facebook post that on Wednesday he and Go-Ahead’s managing director met one of the bus drivers, who told them of his “harrowing experience”.

Mr Yong added that the union was working closely with Go-Ahead to provide counselling support and facilitate his return to work once he has recovered.

“Our public transport workers deserve a safe working environment just like all of us,” he wrote. “Such acts cannot be tolerated and the union will work with the police to ensure that assailants face the full force of the law.”