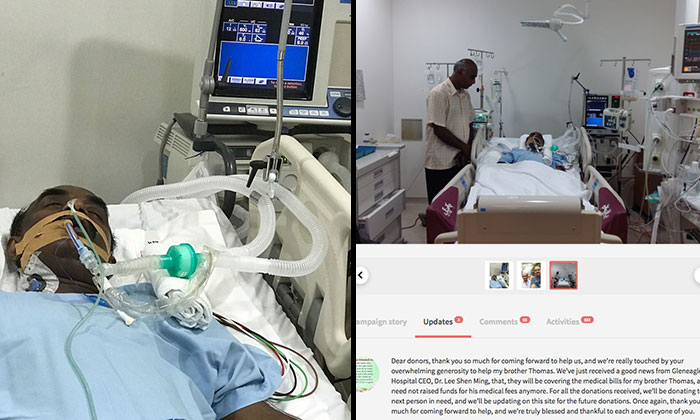 Gleneagles Hospital will pay for the hospitalisation fees of a security guard who collapsed while on duty.

The family of Thomas Lukose, 55, previously set up an appeal on crowdfunding site Give.Asia to help raise funds for the $78,000 hospitalisation bill incurred after the security guard suffered a heart attack on Sept 12 at Gleneagles Hospital.

He was immediately warded in its emergency unit.

His family had wanted to transfer him to the National Heart Centre Singapore the following day, as Mr Lukose's insurance only covered him for subsidised care.

However, an immediate transfer was not possible as there was no spare bed in the intensive care unit (ICU) of the heart centre.

Although the surgeon who operated on him, Dr Sriram Shankar, did not charge for the procedure, Mr Lukose was billed $78,000 by the hospital, of which $13,500 was covered by his work insurance.

Mr Phua Tien Beng, acting chief executive officer (CEO) for the Singapore operations division of Parkway Pantai, which Gleneagles falls under, said in a letter addressed to The Straits Times that the hospital has decided to cover Mr Lukose's outstanding bills, after reviewing the case.

“I want to thank everyone for their concern for Mr Thomas Lukose, one of our security guards at Gleneagles Hospital.

“Thomas received timely and expert care from our doctors and staff when he suffered a heart attack at the hospital. We are very glad that he has made an excellent recovery and is now recuperating at home.

“Ms Salma Khalik's commentary (Allow subsidised rates for patients who opt for but can't get such care; Oct 11) carried a suggestion that the hospital considers waiving the remainder of Thomas' hospital bills not covered by insurance and MediShield Life.

“Having reviewed the case, we have decided that the hospital should cover his outstanding medical bills.

“It is the right thing to do.

“We regret the anxiety caused.”

The news was confirmed by relatives of Mr Lukose on the Give.Asia page.

“Dear donors, thank you so much for coming forward to help us, and we’re really touched by your overwhelming generosity to help my brother Thomas.

“We’ve just received a good news from Gleneagles Hospital CEO, Dr. Lee Shen Ming, that, they will be covering the medical bills for my brother Thomas, and we need not raised funds for his medical fees anymore.

“For all the donations received, we’ll be donating to the next person in need, and we’ll be updating on this site for the future donations.

“Once again, thank you very much for coming forward to help, and we’re truly blessed and thankful to each and every one of you.”

Related Stories
Security guard fails to get bed in SGH, incurs $78k fees after undergoing operation at Gleneagles
Man jokes about being unable to afford ice cream for son -- and 9-year-old stranger offers him money
Swift response by police and SCDF after elderly man falls off e-wheelchair at Yishun
More About:
hospital
heart attack
inspiring