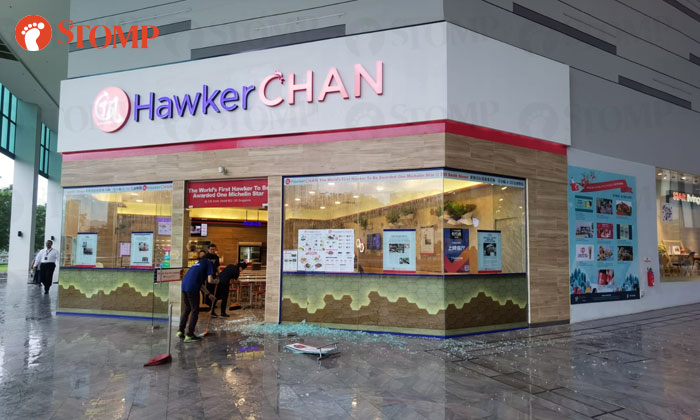 The glass door of a restaurant at 18 Tai Seng shattered into pieces during a heavy downpour on Monday (Dec 3) at about 2.45pm.

Stomper Roger alerted Stomp to the incident and shared photos he took of the scene.

"I was seeking shelter at the mall, waiting for the rain to stop before heading back to my office nearby," he said.

"I suddenly heard a loud sound and turned around to see that the entrance door of the Hawker Chan outlet on the first floor had shattered during the heavy downpour."

Roger said that security officers were present to control the situation and that the area was cordoned off until the staff had cleaned up the broken glass.

It is unclear what caused the glass to break but according to the Stomper, the rain and wind were very strong at the time of the incident.

"No one was injured," he added.

"Fortunately, this happened after the busy lunch period when the restaurant can get very crowded with office people."