Girls slap teen repeatedly, one says: "I hope the public can respect our privacy" 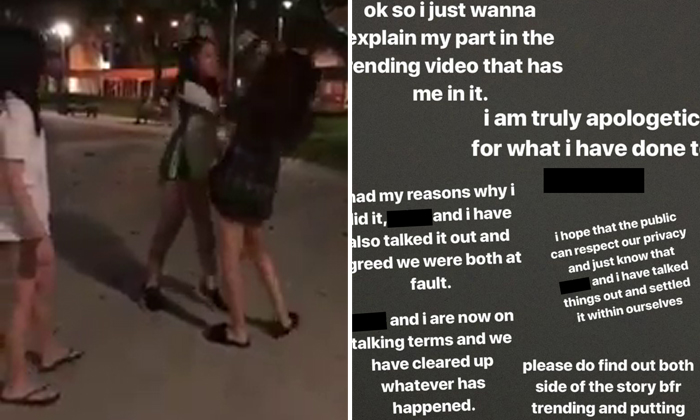 A group of teenagers were caught on camera confronting and repeatedly slapping another girl in a video that has sparked outrage online.

It is unclear when and where exactly the incident occurred, but a video of the dispute started circulating on Facebook yesterday (May 1 ).

According to Shin Min Daily News, the dispute appeared to involve four girls, including the one who was filming the video, against a fifth girl who was dressed in a black shirt.

In the minute-long video, one girl can be heard reprimanding the victim:

During the confrontation, the girl also slapped the victim repeatedly, with a third girl participating in the assault.

The victim, who can be heard trying to explain herself, also appeared to be crying.

All five girls are believed to be acquainted with one another, though it is unknown what sparked the fight.

The original video on Facebook was removed around three hours later, but re-uploaded clips are still available online.

Netizens have also apparently managed to identify the 'main bully', who is believed to have responded to the incident on her Instagram account: 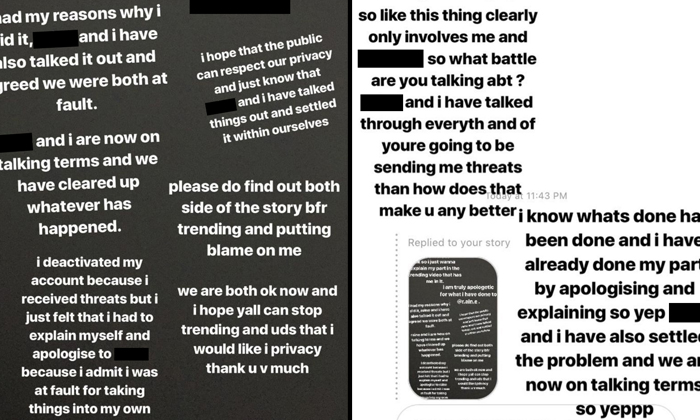 She wrote on Instagram stories that she wanted to "explain her part in the trending video" and that she was "truly apologetic" for her actions.

According to her, she and the victim had talked things out, agreed that they were both at fault and are currently on speaking terms after "clearing up whatever has happened".

"I hope that the public can respect our privacy and just know that [we] have talked things out and settled it among ourselves," she added.

"Please do find out both sides of the story before trending and putting blame on me."

She also said that she received threats following the incident and requested for privacy.

Read her full posts in the gallery.