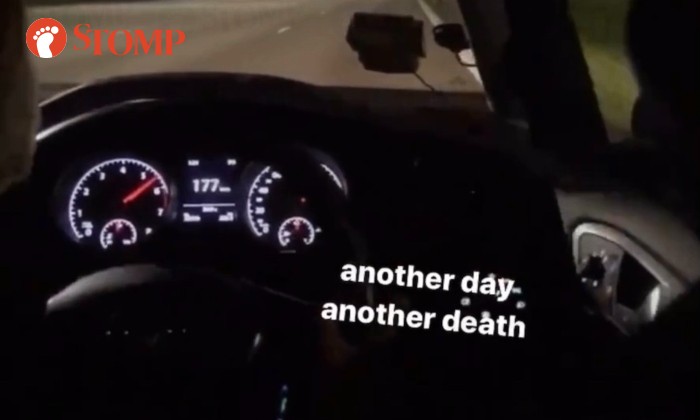 A Secondary 4 girl posted videos on Instagram of her friends speeding along an expressway during the wee hours of Wednesday (Oct 14).

A Stomper was scrolling through Instagram at 2.49am when she saw the videos and shared screen recordings with Stomp.

One of the videos, captioned 'another day, another death', shows someone speeding along the expressway at 177kmh.

Another video shows another youth driving, accompanied with the caption: 'help sia'.

According to the Stomper, the Instagram user is a Secondary 4 student.

"I know they are secondary school students because I've seen her posts with her friends at school," the Stomper said.

The Instagram user had also posted a 'wefie' in April 2018 about being in Secondary 2, which would make her a Secondary 4 student now.

The Stomper mentioned that she was just scrolling through Instagram when she came across these videos.

"One of the videos shows the girl's friend speeding along the expressway at about 170kmh," the Stomper said.

"I was shocked that someone can be driving so fast in Singapore!

"And how can she be allowed to drive at this age when the minimum age to get a driver's license is 18 years old?"

Under the Road Traffic Act, those who drive without a qualified driving license will be guilty of an offence and shall be liable on conviction to a fine not exceeding $10,000 or to imprisonment for a term not exceeding three years or to both.

The Road Traffic Act also states that those who drive a motor vehicle on a road recklessly, or at a speed or in a manner which is dangerous to the public shall be guilty of an offence.

This is not the first time Instagrammers have posted videos of their friends speeding on the road.

In May this year, a youth posted a video of his friend driving at speeds of up to 180kmh along an expressway.

Related Stories
Youth posts video of friend speeding at up to 180kmh on expressway
'Siao lang' rides PMD on road with friends in wee hours and posts video on Instagram Stories
Yet another Instagrammer posts video of cars racing
More About:
illegal
dangerous driving
instagram