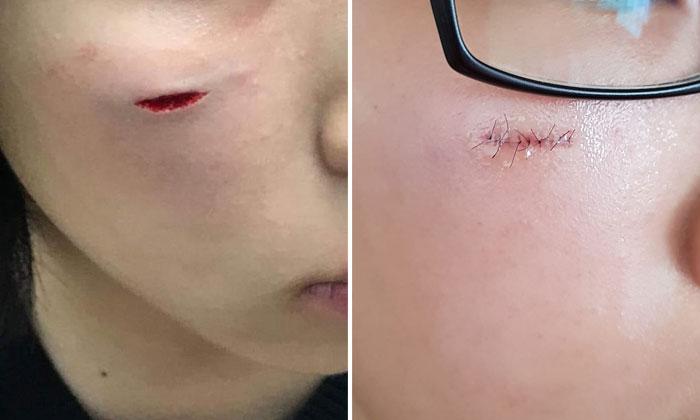 A 14-year-old girl who was playing at the Mirror Maze attraction at Canopy Park in Jewel Changi Airport suffered a cut on her face that required nine stitches.

A spokesman for Jewel confirmed the incident, which took place around 5.15pm on Wednesday (June 19).

"First aid was immediately administered by the attraction ranger on duty when the guest discovered the injury upon exiting the maze," the spokesman said.

The teen's aunt, Ms Susan Goh, 45, posted a photo of her niece's wound on Facebook on Wednesday evening.

My 14 years old niece got a cut at Jewel Changi Airport, Mirror Maze.

Ms Goh, a property agent, told The Straits Times that her niece had been playing in the maze with five other children when the incident occurred.

The girl was not aware that she was cut until one of the other children she was playing with in the maze pointed it out.

The girl wanted to clean it with a piece of tissue but was stopped by her mother who could tell that it was a deep cut, Ms Goh said.

Attraction staff brought the teenager, who will turn 15 next month, to a clinic in Terminal 3 to seek medical attention.

As the girl's wound required stitches on her face, the doctor referred her to a hospital for treatment.

She received nine stitches, and the doctor said it was likely to cause scarring, Ms Goh said.

"Thankfully, it's not life-threatening," Ms Goh said, adding that she posted the photo on Facebook to warn others to be careful when visiting such attractions, especially when parent supervision is not mandatory.

The Jewel spokesman said: "We regret the guest's unfortunate experience and wish her a smooth recovery. We urge all guests to stay aware of their personal safety whilst having fun at the attractions."

On June 14, a woman injured her hand after tripping while on the sky nets attraction at Canopy Park.

In response to queries following the incident, a Jewel spokesman said that the attractions at Canopy Park, which opened to the public on June 10, have undergone numerous safety tests before they were certified safe for operations.

The net, which is suspended 25m above ground, is made of thick, tough ropes reinforced with metal. A thinner safety net is secured beneath it.

ST observed that the gaps in the main net are rather large. Children and those with smaller feet will have to tread more carefully to prevent their feet from slipping into the gaps.

The metal structures and hooks reinforcing the net could also be of concern if visitors are not careful.

Over twenty people were on the net at the time, and at least one ranger was spotted assisting visitors.

At Jewel, ST spoke to Chudapat Nimnoi, 27, a permanent resident who is married to a Singaporean here.

“Now that I’ve heard of (the previous injuries), I won’t let my children go in (to the Mirror Maze and Sky Net),” she said. She has two children, aged six and five.

However, the accidents do not deter mother of two, Jasline, who is in her 40s.

She has given her children, aged 10 and 12, gloves and covered shoes for going onto the Sky Net (Bouncing).  “We’re not very worried,” she said.

ST also visited the Mirror Maze, where visitors are given “wayfinding sticks”, which resemble short foam pool noodles, to aid them in navigating.

Rangers at both attractions reminded visitors not to run or push one another at the entrances.