Girl, 10, appeals for return of pet lovebird that flew off from Choa Chu Kang HDB flat 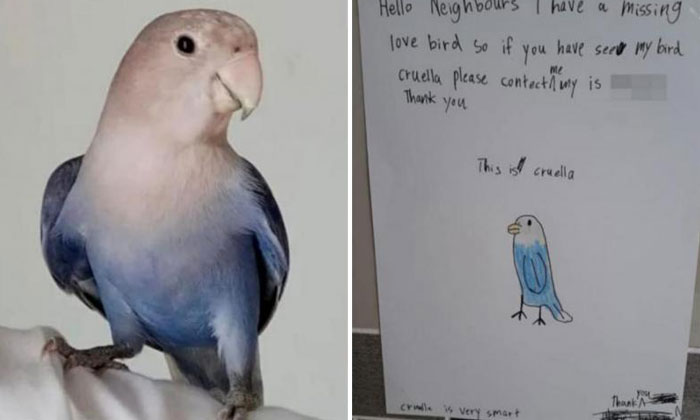 It has been more than a month since a pet lovebird went missing from the home of young Raine Chen in Choa Chu Kang.

But refusing to give up hope, the 10-year-old girl has gone from posting hand-drawn notices around the neighbourhood and lift lobby to sharing a handwritten appeal to a “cabby uncle”.

Raine’s father, Mr Chen Junming, told Chinese evening daily Lianhe Wanbao that the light blue lovebird, Cruella, had flown off from their HDB flat at Block 430 Choa Chu Kang Ave 4 on Nov 12 at around 11am.

Mr Chen, 35, a salesman, said his daughter had taken Cruella out of the cage to play with it that morning. She forgot to shut the window and discovered later that the bird was gone.

Cruella, which is one of four pet birds, was bought from a pet store for $120 six months ago.

As Raine had watched then one-month-old bird grow over the months, she developed a deep affection for it.

“Cruella is very smart. When she was learning to fly, she’d fly into our hands or on our shoulders, then keep still,” recounted Mr Chen.

“When it flies off, we’d whistle and it comes back to us. We often take it downstairs, and the children in the neighbourhood enjoy playing with it too.”

A sad Raine decided to draw a picture of her own missing lovebird notice and put it up next to the ground floor lift of the block.

“It was entirely my daughter’s own idea. I didn’t know about it until I saw the notice,” said Mr Chen.

He was told later that Cruella was last seen at the Block 429A coffee shop, and had landed on the shoulders of some diners. The last account was that a man, known to be a cabby, had gone off with it. 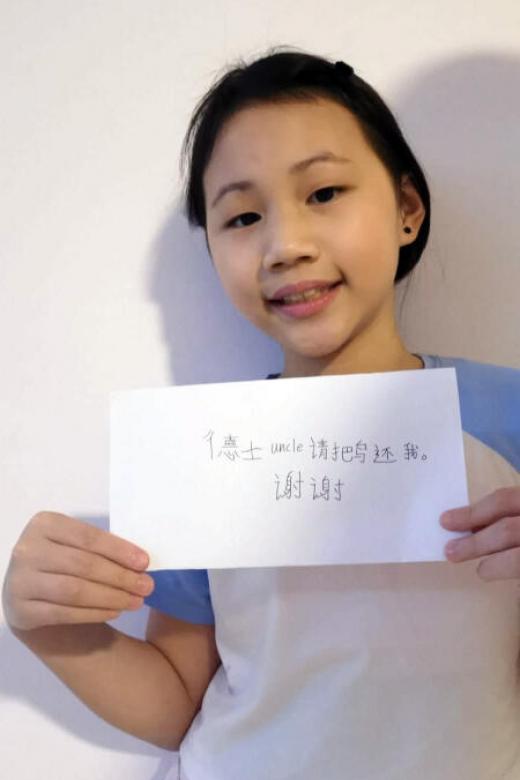 Raine's new appeal to the cabby uncle who was last seen playing with Cruella.PHOTO: LIANHE WANBAO

Raine has decided to appeal directly to the cabby uncle with a new note: “Taxi uncle, please return the bird to me. Thank you.”

Said Mr Chen: “I hope the taxi driver will be able to return the bird to her after seeing this report.”