Wow! Can't believe what my dad found in his Coke from vending machine in Yuan Ching 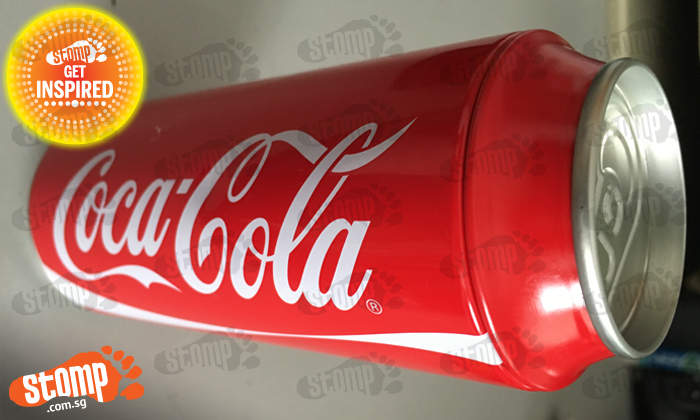 Stomper Mervyn's dad was surprised when he purchased a can of Coke from a vending machine in the Yuan Ching area and it turned out to be 'un-drinkable'.

Instead, he found other gifts such as food vouchers and a token to redeem an actual Coca-Cola drink in the can.

"My dad came back from his usual walk and told me that he tried to buy a can of Coke Zero from a Coca-Cola vending machine at Yuan Ching area, but it turned out to be a non-drinkable Coke instead.

"I told him I have heard of this before and explained it to him. My dad knew and smiled."

"Also, instead of using the token to get his drink, he used coins to buy one again... :P"

This is not the first time Stompers have gotten 'surprises' while buying Coke.

In September last year, Stomper A recounted how he had gotten a Coke can with similar gifts inside instead of the Qoo drink he wanted.

He said he was initially "pissed off" as he thought he had gotten scammed, until he opened the can and saw the food vouchers.

Likewise, he also had a token to redeem a Coca-Cola beverage but chose to keep it instead.

In a separate incident, a man found a stuffed polar bear in a bottle of Coke. He had shared photos of his experience online, which soon went viral.

Check out the various coke surprises by browsing the gallery or see more surprising discoveries below.

Related Stories
My lucky day! Here's how I managed to get these popular 'shampoo bottle' milk tea
Man pays $3 at vending machine in Bishan -- only to get some 'air-range' juice
Would you like a 'filter' with your iced Milo?
More About:
surprise
cool
creative
discovery