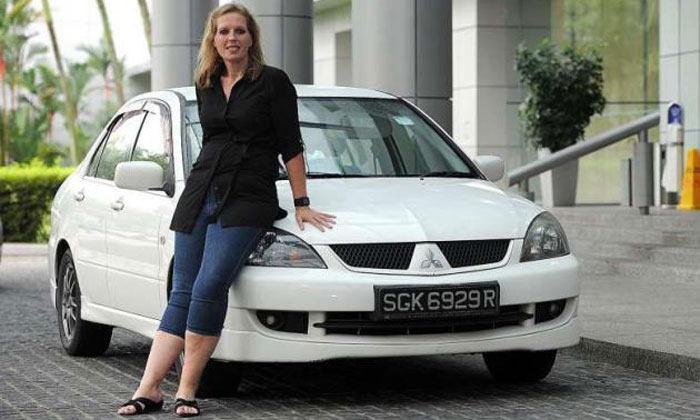 The 44-year-old Briton was once told by a Malaysian man that she was the first white woman he had ever spoken to.

"I've also been asked by a drunk guy one night if I was a Chinese taxi driver in disguise," she said.

Uber said she is the only Caucasian woman out of its "tens of thousands of driver partners", over 98 per cent of whom are Singaporean.

She moved to Singapore with her banker husband in 2010 and became a permanent resident in 2013. But their 13-year marriage ended last year after he had an affair. He has since remarried.

Ms Gibbons said that under the Hague Convention - which is meant to offer protection from cross-border child abductions - she cannot leave the country with her children without her former husband's consent.

"I can't move on with my life until he decides we can leave," she told The Sunday Times.

She estimates there could be 200 expatriate women divorcees in Singapore, going by the number in a support group.

Although her husband pays maintenance which covers the rent for her family's apartment in Pasir Ris, fees for the children's local school and other living expenses, she wanted to make her children's lives easier by having a car. She started driving with Uber in April.

Uber-owned Lion City Rental gives her a 10 per cent discount on the car rental because she is a single mum. She works an average of 30 hours a week, when the kids are in school or asleep.

It has been hard for her 10-year- old son and eight-year-old daughter to adjust to life after the divorce. "My daughter is the only white child in her year, and the only white child whose parents don't live together," she said. "When you're going through a divorce with children, they need that stability... In Singapore your friends become your family, but friends aren't the same as a granddad or an aunt and uncle."

But the job has been like "a lifeline" for her, and she enjoys talking to her customers. She once found herself counselling a woman whose husband also had an affair. "She said it's nice to talk to someone who has been through it and come out the other side," she said.

Passengers have left feedback for her in the Uber app commending her for being "very strong" or thanking her for sharing her story.

Business developer Rachel Ooi, 28, who took a half-hour ride in Ms Gibbons' car last Friday, said: "A lot of Singaporeans often see Caucasian women as tai-tais (wealthy housewives)... But if they go through a divorce and they have kids it can become very messy."

More About:
inspiring
get inspired
uber