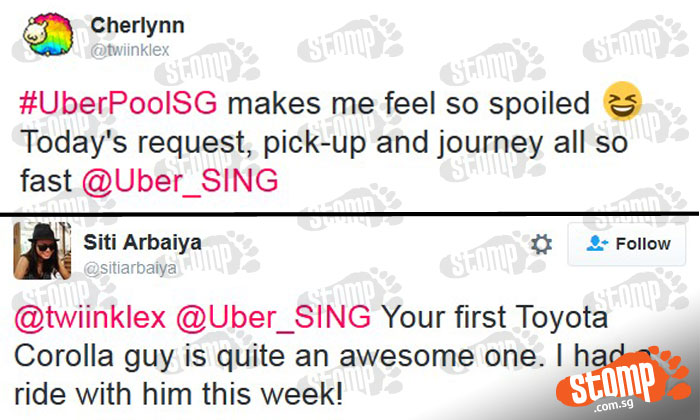 Stomper C was impressed with the efficiency and good service from an Uber driver yesterday evening (Aug 30).

When she posted about her positive experience, she was pleasantly surprised by how another passenger responded and echoed her sentiments.

"There was an UberPOOL promotion where you could carpool with other people going in the same direction and pay only $5, regardless of your destination or distance travelled.

"So I requested for a ride at about 7pm, asking to be picked up at Singapore Press Holdings (Braddell) and dropped off in Yishun.

"I managed to get a driver very quickly, unlike on previous occasions where I had to keep trying due to peak hours and the promotion's popularity.

"I was even more pleased when my driver, Warren, arrived faster than the estimated time.

"He was courteous, asked if I had a preferred route (I said no and he told me he would follow the GPS then), and also informed me that he would be going to pick up another two passengers at Bishan, which is on the way.

"I noticed that he even called the other passengers to check with them which pick-up point they would like him to arrive at, as Junction 8 has more than one taxi stand.

"After picking them up, he informed them that we would be heading to Yishun first.

"It was an extremely smooth and pleasant ride home that did not take long.

"Satisfied with my experience, I tweeted about it and tagged Uber Singapore, who retweeted me.

"I was surprised when another passenger, who saw the tweet, replied and said that she has encountered the same driver. She called him 'awesome', which I agree with.

Related Stories
Passenger wants to make this Uber driver famous: Find out why
Best Uber ride ever: Free Wi-Fi, water and charger
Cabby restores woman's faith in humanity after refusing to accept payment knowing that her son is in hospital
More About:
get inspired
inspiring
uber
good service