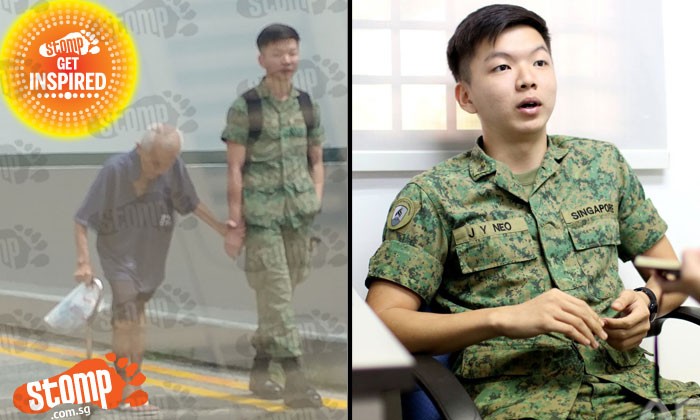 A soldier who walked hand in hand with an elderly man near Beauty World Centre on Tuesday (Jan 3) has been identified as PTE Randyne Neo, an ammunition storeman from General Ammunition Base of The Singapore Armed Forces (SAF).

Stomper Arthur had witnessed the heartwarming act while he was on the way to lunch on Tuesday (Jan 3), and alerted Stomp to it.

After Stomp posted the photo taken by Stomper Arthur on our website, the soldier's kind gesture stole the hearts of netizens.

According to The Singapore Army, 21-year-old Randyne was having lunch at Beauty World Centre with six of his camp mates when he helped the elderly man who had approached them.

The man had grabbed his arm and asked for his company as he wanted to purchase a toothbrush.

PTE Randyne agreed to accompany him and walked with the elderly man to the taxi stand.

Randyne was surprised at first when the elderly man grabbed his arm but said, “It is actually a natural instinct to help those who are in need of help.

"I believe that anyone who was in my position would offer help as well.

“My family brought me up with the right values and taught me that I should help others to the best of my ability whenever I can.”

He added that under the care of his commanders and peers, he is constantly reminded to show concern to those around him.

He was taken aback by the media attention he received as he did not expect it and added, "A lot of similar kind acts go unnoticed every day but I feel that it’s normal human nature to help one another.”