Single mum with 4 kids and only $200 for April has unforgettable birthday, thanks to Stomper and SPF 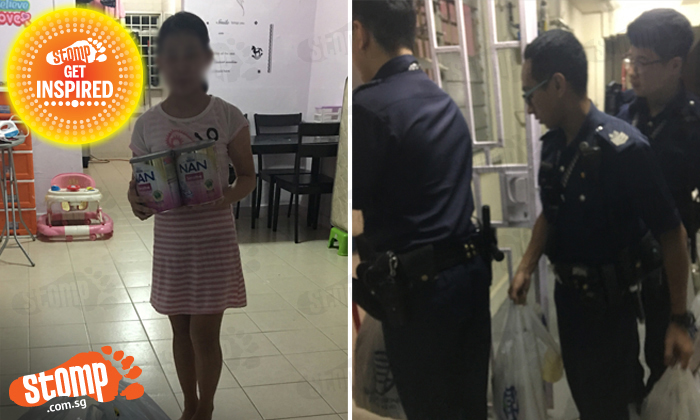 According to Ian, the chairman of the Community Development and Welfare Fund is helping with social outreach for AA. She has also been referred to a Grassroots Organisation for further assistance.

If you are keen to help out more needy families whom Stomper Ian is assisting, please join his Facebook group IAN FREE MILK BLESSING and message Ian Kayden by starting your note with: "I am a donor from Stomp".

The encounter that Stomper Ian had while delivering necessities to a low-income family might just be the most heartwarming thing you will read about this week.

Ian was alerted to a single mother's predicament about having only $200 to survive on with her four children for the month of April.

Her birthday was just two days away and she wished for food so that she could feed her kids -- which Ian decided to fulfil.

Along the way, he met equally selfless souls from the Singapore Police Force, who helped him with his kind deed.

"I was tending to an emergency call for help, for a family of five. AA is a single mum and has four children.

"She is currently waiting for the Social Service Office's review and has been surviving on $200 since April 1. It sounds like April Fool's but it is true. She has no access to family support and her friends have limited resources.

"Her friend approached me and pleaded for her plight, as two more days would be AA's birthday. I asked her what her birthday wish was and she said she just wanted to have food and milk for the younger infant.

"In half an hour while still replying to her on my group forum, she was given a surprise.

"When I was removing the items from the Grab vehicle, the milk powder tins all landed on my arm.

"The police officers in the same carpark actually helped me and they chatted with me, asking why I was doing grocery shopping at this hour. I said I was rendering emergency crisis assistance to a family.

"The Malay police officer even took the initiative and said to ask them to seek help from the SSO or the MP.

"The 'triplets' actually helped me till the unit. The lady was shocked when she saw three officers at her door.

"The actions of the three police officers were selfless. They are role models of the society.

"The extra mile they went made my emergency assistance become even more meaningful, letting this family feel warm, loved and that someone still cares.

"I am very impressed with the police officers because not only do they protect our nation, but they are role models for humanity. Kudos, SPF!"

In a report yesterday (Apr 15), Stomper Ian shared how he met two kind souls when he was delivering groceries to needy families in parts of Singapore.

We think Stomper Ian deserves a huge salute for his many generous deeds too!