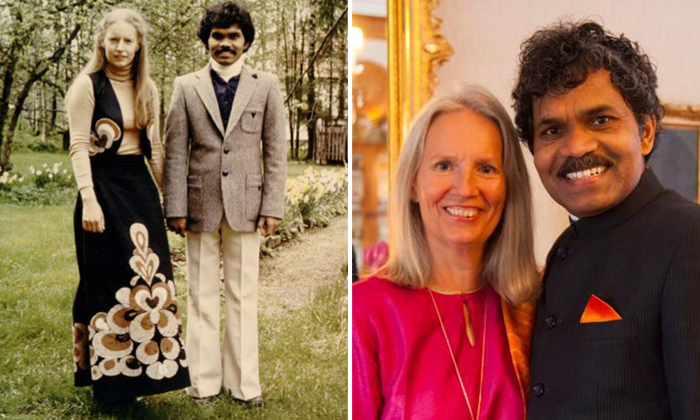 He was a 24-year-old sketch artist from a poor family belonging to the lowest caste in India.

She was a 20-year-old tourist from Sweden and of noble stock.

But when Ms Charlotte Von Schedvin stopped to get a sketch of herself by Mr P.K. Mahanandia in Delhi's Connaught Place, a shopping and business hub, in December 1975, neither could have foreseen it was the beginning of a love story.

The English translation of a best- seller about their remarkable story - The Amazing Story Of The Man Who Cycled From India To Europe For Love - by Swedish author Per J. Andersson that was published in 2013, was released last month.

Speaking to The Sunday Times via Skype from their home in Boras, Sweden - a large estate which has four lakes and a forest - the couple still vividly remember their chance meeting more than 40 years ago.

Ms Von Schedvin had spotted the curly-haired artist sitting under a fountain in Connaught Place and decided to test out his claim of "a portrait in 10 minutes" for 10 rupees.

Mr Mahanandia, now 65, told The Sunday Times: "It was a dark winter evening. I suddenly saw long blonde hair and big blue eyes. I said to myself, 'oh my god, she looks like an angel'."

Ms Von Schedvin made him nervous, said Mr Mahanandia, who was studying fine arts at Delhi College of Arts. "My hands kept shaking."

Explaining his nerves, he said it was partly due to a "prophecy" by an astrologer that his wife would belong to the sun sign of Taurus, come from a faraway land and would own a jungle.

"I didn't even ask for her name first. I asked her if she was born in May, was a Taurus and owned a jungle. She kept saying yes to all the questions," he recalled, laughing.

"I knew we were destined to meet. I told her she was going to be my wife, and then I got frightened that she would go to the police station which was nearby."

He left a strong impression on the young Swedish woman.

Ms Von Schedvin, now 61, told The Sunday Times: "I felt attracted (to him) and had a very warm feeling. I thought he was a nice boy, with a wide smile and curly hair.

"For me, it was not just about getting married but having a good relationship. It is the Swedish way."

Less than three weeks later, she followed him to his home in the state of Orissa, now known as Odisha, where they were married in tribal tradition.

"For me, going to Orissa was like coming home. Even now, I still have that feeling as soon as I set foot in Orissa," she said.

She wrote to her parents to tell them she had found her life partner.

As she had driven to Delhi with her friends along the famous hippie trail - used by the long-haired hippies of that era to travel from Europe to India via Turkey, Iran, Afghanistan and Pakistan - she returned to Sweden the same way.

The poor artist promised he would join her in Boras, but refused to accept her money for the journey.

They kept in touch through letters for more than a year before he decided he had to somehow find a way to get to Sweden.

He sold his belongings, bought a second-hand bicycle for 60 rupees and decided to hit the hippie trail after hearing how people had made their way to Europe by motorcycle.

"I thought, why not a bicycle?" said Mr Mahanandia, who set off on Jan 22, 1977, with little more than US$80 and his paint brushes. His portraiture skills came in handy.

"People would pay me with food and some invited me to their homes," he recalled. It was a tough journey.

The lowest point came in Kabul, Afghanistan, where he had to sell blood at a hospital to get money for food.

Fortunately, The Kabul Times ran a report about how he was cycling to Europe to be reunited with the love of his life.

"I ended up having a lot of customers", Mr Mahanandia recalled.

Though he was on the road, he continued to receive letters of encouragement from Ms Von Schedvin via the poste restante service, where a post office holds mail until the recipient calls for it.

Four months and more than 11,000km later, on May 28, a tired and not-too-fresh-smelling Mr Mahanandia got off the train from Venice in Gothenburg, about 70km from Boras, where his wife was waiting.

"When she saw me, she came dashing towards me. I said, 'sorry I smell bad.' But she held me."

The end of that extraordinary journey marked the start of the couple's life together in Sweden.

Mr Mahanandia became an art teacher - his paintings have been exhibited in Sweden and Europe - while his wife taught music.

They have two children - Emelie, 31, a textile economist, and Karl-Siddhartha, 28, a helicopter pilot. "He is a good husband and good father," said Ms Von Schedvin.

On their love story, Mr Mahanandia said: "Everyone has the potential to find the right one.

"We came from contrasting backgrounds but it is the dissimilarities that created value in our life. It's a gift we got."

From outcast in India to art and culture adviser to Sweden

Mr P. K. Mahanandia has held many painting exhibitions across Europe and is now an art and culture adviser to the Swedish government.

Since arriving in Sweden, thousands of kilometres away from India, nearly 40 years ago, he has carved a life teaching art and holding exhibitions.

One of eight children, he came from a family of weavers belonging to the lowest caste in Indian society.

In school, he was made to sit outside the classroom during classes and was not allowed to eat with other students in the canteen.

Still, he was among the first in his tribal village of Kondpoda to leave for an education.

He attended the Mahendra High School in Athmallik and then the Government College of Art and Crafts in Khallikote.

He was given a scholarship to study fine arts at the College of Art in Delhi in 1971.

Delhi was a melting pot of people from different religions and castes but it was still financially tough for the young Mr Mahanandia.

He had to sleep under bridges or at the railway station when he had no money for accommodation.

As part of the scholarship, he received 90 rupees a month, but the money ran out in just two weeks, he recalled.

He resorted to gatecrashing weddings for food.

Before he met Ms Charlotte Von Schedvin, he had already garnered local fame for his portrait of Russian cosmonaut Valentina Tereshkova, the world's first woman in space.

"A boy from the jungle meets the woman from outer space," read one newspaper headline.

In 2012, he was awarded an honorary doctorate degree from Utkal University of Culture in Odisha.

He was also designated the Oriya cultural ambassador to Sweden by the Odisha government.

Related Stories
Cafe employee confesses her love to colleague -- and customer live-tweets what happens next
Unlikely lovers? Check out this love story between American teacher and Chinese farmer
Girl's parents have been married for 27 years -- and their love story will tug at your heartstrings
love
romance
romantic
couple
heartwarming
inspiring