My dad, the hero: Off-duty fireman comes to the rescue of child locked in lorry at Woodlands Blk 302A 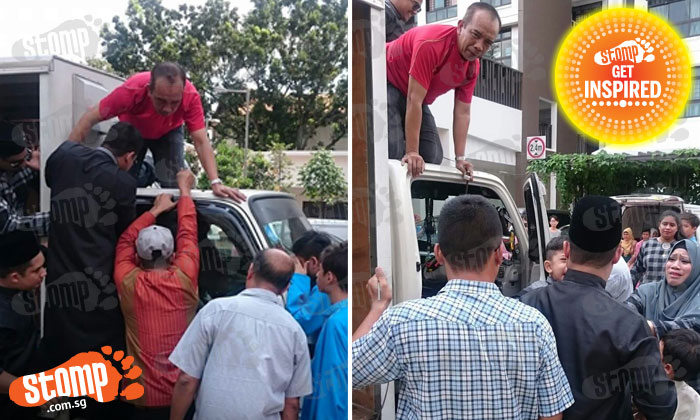 An off-duty fire officer came to the rescue of a child who was locked in a lorry for around an hour at Block 302A Woodlands Street 31 today (July 10).

Stomper Affif and his parents were at his sister's home when they saw a commotion at the carpark.

They initially thought nothing of it but when they left about 10 minutes later, they saw that the commotion grew significantly and overheard that a small child had accidentally locked himself in a lorry.

My dad, being a fire officer, went over to provide assistance.

"He didn't jump in straight away.

"Rather, he observed from far to assess the situation before coming up with the best solution to tackle the problem without causing too much physical damage to the lorry.

"Next thing I knew, he was on top of the lorry, armed with metal bars and other things he could find to pry the door open.

"With teamwork and effective communication with the help of passers-by, the young boy was finally freed and returned back to his parents."

According to Affif, the parents were overcome with emotion and rushed to make sure the child was not traumatised or dehydrated.

They then called his father back and shaked hands and showed genuine appreciation for his selfless act.

Said Affif: "My dad, the hero"

More About:
rescue
kudos
get inspired