Man who saved sleeping guy receives Stomp 'Goody Bag': Not the first time he has stepped up in public 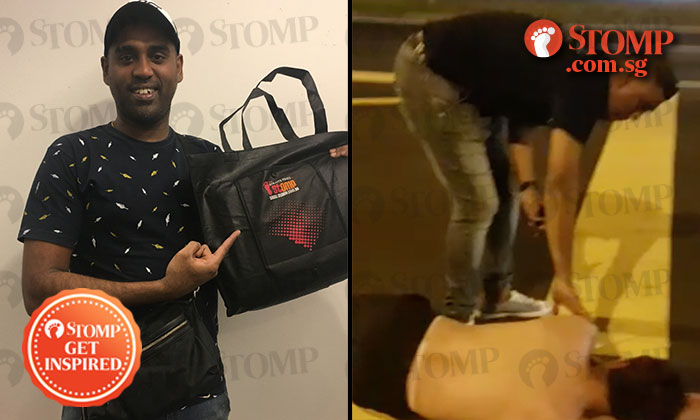 When he saw a half-naked man lying on the road as numerous vehicles went by, Max Faz's first instinct was to help instead of simply leaving him in the lurch.

A friend, Stomper Ita, had witnessed Max's chivalrous act and filmed the incident, which occurred at the entrance towards Foch Road in Jalan Besar, on May 20 at around 3am.

The video shows Max approaching the topless male, who appeared to be drunk and had his shoes removed, asleep in the middle of the road despite oncoming traffic.

Max, a club singer who had been working in the area at that time, roused the guy from his slumber and got him to sit up straight.

The man, seemingly dazed at first, eventually put his shoes back on and left the scene.

Besides being featured on Stomp and other publications, the video was also posted on Facebook, where it has garnered over 228,000 views and more than 1,100 shares to date.

Netizens were full of praise for Max, who was identified in the posting.

Stomp got in touch with Max and invited him down to our office for an interview yesterday (May 25), during which he shared his thoughts on the incident.

To the 37-year-old, it was a simple gesture that stemmed from wanting to assist someone in need.

He was not aware that someone had filmed a video of him nor did he expect it to go viral, adding that he felt " quite shy" about getting Stomped and even more "shocked" that we reached out to him.

Aiding people also comes as second nature for Max, who revealed that this is not the first time he has stepped up to extend a helping hand in public.

"I ever stopped a fight at Cuppage Plaza and I think it was on Stomp [too]," he said.

"There are a lot [of other incidents] but I can't recall, because I just help and that's it. I never asked for anything in return."

The Good Samaritan has valuable and wise advice for those who might one day come across someone in trouble or find themselves in a similar situation too.

"Don't judge people. Just help. Whatever you can do, just help."

Stomp presented Max with a 'Goody Bag' for his gallant behaviour, as part of our efforts to recognise everyday heroes and highlight inspiring deeds.