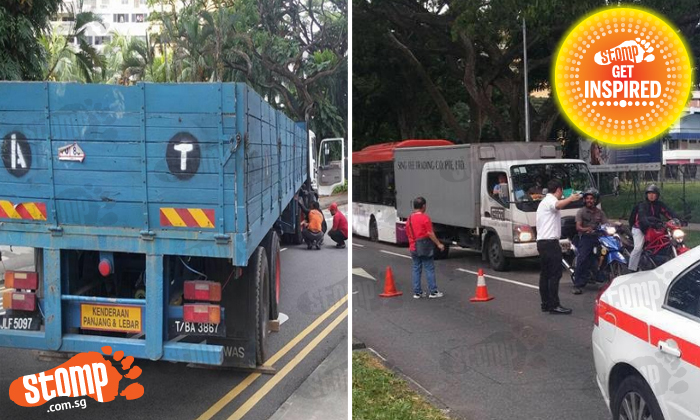 Stomper Francis was pleased to see residents from nearby community clubs coming together to direct and control traffic after a 40-footer truck broke down along a one-way street at Telok Blangah Crescent yesterday (Feb 6) at around 6pm.

"The awkward positioning of the truck blocked out two lanes. Cars turning from Telok Blangah Way into Telok Blangah Crescent were unable to pass through.

"Thus, this resulted in a massive traffic congestion along both sides of Telok Blangah Way.

"Civil-minded and quick thinking staffs from nearby Radin Mas Community Club, as well as members from Mount Faber Zone 'B' Residents Committee, came together and assisted the police officers in directing and controlling the traffic.

"They also provided prompt updates to drivers who were stuck in the 'snail-crawl' traffic.

"At about 7.30pm, the truck was finally towed to one side of road and traffic was back to normal. Kudos for the help rendered!"

On Feb 2, a kind biker who also helped to direct traffic after a van flipped on its side at Choa Chu Kang Avenue 1 on Feb 1 was seen assisting passengers stuck in a skidded car and directing traffic at Bedok North Flyover.

Similarly, on Jan 23, another helpful biker braved the pouring rain to push traffic barricades to the side to ease the traffic jam on the road.