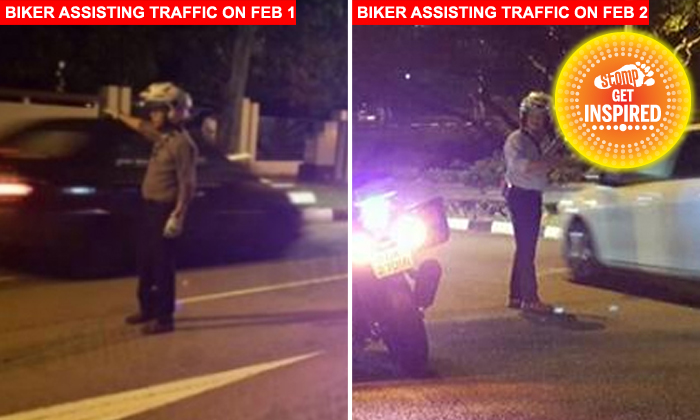 A biker who helped to direct traffic after a van flipped on its side at Choa Chu Kang Avenue 1 was seen assisting passengers stuck in a skidded car and directing traffic at Bedok North Flyover yesterday (Feb 2).

On Tuesday (Feb 1), a Stomper was heartened to see the motorcyclist stop and help to direct traffic after a van had flipped on its side at Choa Chu Kang Avenue 1.

The same Stomper alerted Stomp to a Facebook post showing the same biker assisting another accident scene at Bedok North Flyover before entering Pan Island Expressway (PIE) Tuas, where a car had skidded off and landed on the side grass patch.

"While heading home at PIE towards Tuas with his wife, the biker noticed a skidded car on his left at Bedok North Flyover before entering PIE Tuas, and later saw a man trying to get a child out of the vehicle.

"Thankfully, the biker mentioned that the little girl and her father are unhurt. While at the accident scene, the motorcyclist assisted the driver and conducted traffic control, while his wife called for the ambulance.

"The Traffic Police (TP) did not send any resources as there were no damages and injuries. Instead, a Land Transport Authority (LTA) traffic marshall was activated.

"The biker and his wife left the scene after the authorities arrived. Team Diversion Singapore would like to thank the biker for the help rendered.

"He is also a member of the Team Diversion Escort who never fails to assist in RTA whenever he comes across one.

"Note to fellow bikers and drivers, please slow down when approaching the bend at the exit of Bedok North Flyover entering PIE Tuas. Accident prone area according to the Expressway Monitoring and Advisory System (EMAS) personnel at the scene."

Related Stories
Would you do the same? Taxi driver returns $10,000 note he found in his cab
Remember biker who pushed aside road barricades to ease traffic in heavy rain? Here's what she looks like
Awesome students help to push man in broken motorised wheelchair across pedestrian crossing at Bishan St 14
inspiring
helpful
motorcyclist
biker
good deed
good samaritan