Grandfather learnt Instagram to draw for his grandchildren everyday 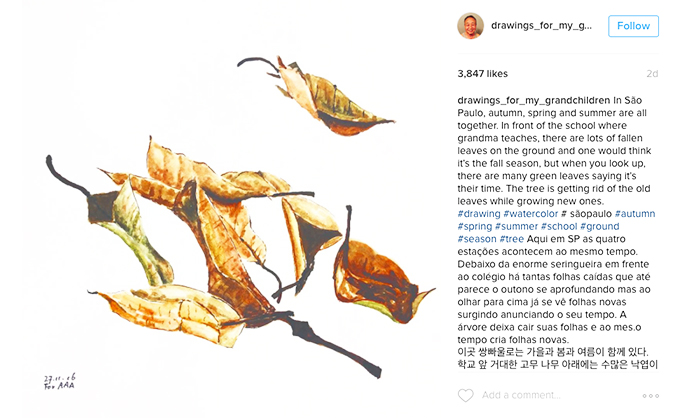 On 28 November (Tuesday), Facebook user Ji Lee posted a video titled "How my grumpy 75-year-old father learned Instagram to show his love to his three grandchildren".

The post garnered more than one million views in just two days.

In the video, Ji Lee describes how his father, who lived in Brazil missed his grandchildren who had moved abroad to Korea and New York.

In the past, Ji Lee's father, Chan Jae's task was to bring his grandchildren to school.

After they left, most of his days were spent watching Korean shows which made Ji Lee and his mother very worried.

In order to get him active again, Ji Lee and his mother decided to teach him how to use Instagram to post daily drawings dedicated to his grandchildren.

Nevertheless, for his grandchildren, he still pushed himself to learn how to use it.

On his Instagram account, it is written, "I'm a 75 y/o grandpa living in Brazil. My 3 grandkids live in Korea & NY. I learned Instagram to draw everyday for them. Grandma writes the stories."

What a heart-warming story of a grandfather's love for his grandchildren!

Related Stories
This old lady travels through 90 years of her life in one single day
Devoted daughter carries paralysed dad out for walks on the street thrice a day
Employer hoping to raise over $86,000 for maid of 25 years who suffered stroke
heartwarming
cute
instagram
drawing