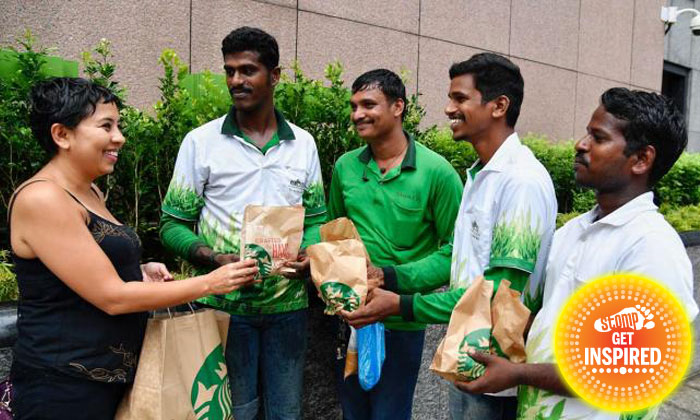 In our annual Causes Week, back for its fifth year, we spotlight individuals and groups that are making a difference in the community, and look at how others might pitch in too.

Foreign worker Murugan Ganeshan was pruning plants outside Capitol Tower in the punishing 4pm heat two Saturdays ago when a woman approached him.

The Indian national was initially puzzled.

Then as lawyer Dipa Swaminathan, 44, explained that she was giving him free food from coffee chain Starbucks, he broke into a smile.

Mr Murugan, 46, who has been in Singapore for seven years, said he was delighted by her thoughtful gesture.

While most Singaporeans have Saturdays free, most foreign workers continue toiling, constructing buildings and fixing roads.

To bring them a little joy, Ms Swaminathan has teamed up with 10 Starbucks outlets to give away unsold food items to migrant workers in the stores' vicinity.

"As you know, they would never be able to go into Starbucks and get a drink or muffin. What better thing to do than to take perfectly good food destined for the bin and to give them a snack," said the Singapore permanent resident.

This food redistribution project started by chance in May, when Ms Swaminathan visited Starbucks' Singapore Polytechnic outlet to buy coffee for parents of players on her son's tennis team.

"I saw they had a whole container full of pastries and I knew that they close at 4pm on Saturdays. So I asked if they were throwing away all the food and if they could give it to me instead and I'll go pass it to migrant workers," she said.

She paid for her coffee, drove out, and passed the pastries to workers mending the road. A Facebook post she put up then went viral.

"Some people thought it was a donation initiated by Starbucks and they were saying they will start patronising Starbucks because it is doing such a good thing," said Ms Swaminathan, assistant general counsel at Singtel.

"Using that, I wrote to Starbucks - including their worldwide CEO - and said, 'You've got so much good publicity out of this, why not consider doing it in Singapore?' "

So from June, the Singapore Polytechnic outlet started passing the unsold food to the lawyer. And by October, the project had expanded to 10 Starbucks outlets in schools or in the business district - which are also stores that close earlier on Saturdays.

Through Facebook, Ms Swaminathan has mobilised a group of 10 to 15 volunteers to help her collect food from the various outlets each week, and later distribute it to workers nearby.

She estimated that each outlet passed the volunteers 20 to 30 items every week.

Each week, the food goes out at random to workers nearby.

"Literally within minutes, it's donated because there are migrant workers everywhere in Singapore," she said, adding that the random distribution allows volunteers to reach different groups of workers instead of heading to the same work sites each week.

Distributing the food immediately also means the pastry will not go bad before it reaches the workers.

The coffee chain said it is thinking about how to extend this programme to Singapore.

"We are also encouraged that we have customers, like Dipa, who are passionate about these causes as well," said a Starbucks spokesman.

Ms Swaminathan has been helping migrant workers through several projects.

Each Deepavali, she collects money from friends to buy and distribute phone cards to foreign workers in Little India so they can call home.

She also collects raincoat donations for foreign workers who have to work through bad weather.

"But now, I'm happy to know there are (people) who care about us and appreciate our work."