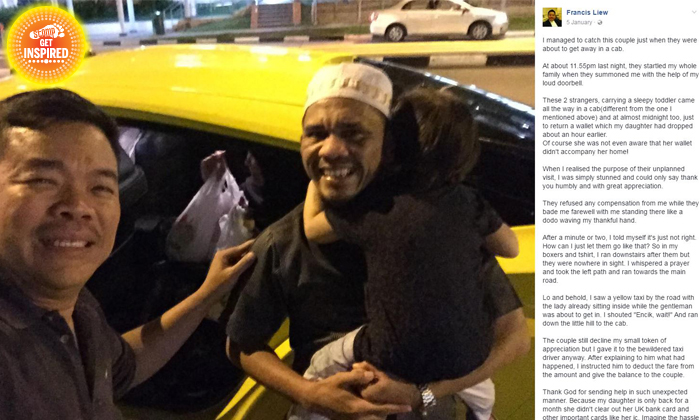 How far would you go to return an item you found, which someone had misplaced?

Facebook user Francis Liew was touched after finding out the answer to that question, thanks to a kind couple.

In his Facebook post, Francis detailed how he was startled by a couple who rang his doorbell at 11.55pm last Wednesday (January 4).

Upon opening his door, he saw a couple carrying a sleepy toddler, and was stunned when he realised the purpose of their visit.

They had taken a cab to get to his home, just to return his daughter's wallet, which she had misplaced about an hour before they arrived at his doorstep.

Francis was in awe at the trouble they went through to return his daughter's wallet, which she had not realised was missing.

He could only humbly say thank you, and the couple also refused any compensation from him.

"After a minute or two, I told myself it's just not right. How can I just let them go like that," said Francis in his Facebook post.

"So in my boxers and t-shirt, I ran downstairs after them but they were nowhere in sight. I whispered a prayer and took the left path and ran towards the main road.

"Lo and behold, I saw a yellow taxi by the road with the lady already sitting inside while the gentleman was about to get in.

"I shouted "Encik, wait!" And ran down the little hill to the cab.

"The couple still declined my small token of appreciation but I gave it to the bewildered taxi driver anyway.

"After explaining to him what had happened, I instructed him to deduct the fare from the amount and give the balance to the couple."

Francis was also thankful for the unexpected help he received as his daughter had only just returned from the UK, and her overseas bank cards and ID were in that wallet.

"There are still many nice people around! If you know me, you will know that I would have done the same for anyone too.

"Now I will continue to do so with more purpose and oomph. Let's not lose faith in humanity!"

Stomp has contacted Francis and he will be updating us with more information.